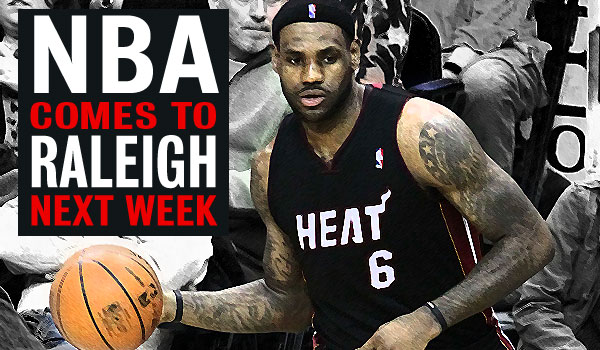 Cary, NC – If you ever wanted to see an NBA game live and in-person, you’ll get your chance next week. On Tuesday, October 23, the Charlotte Bobcats take on the Miami Heat at PNC Arena in Raleigh.

It’s traditional in the NBA for teams to play some pre-season games away from their regular venues.

The Bobcats are just returning from Taipei. In previously years, they’d played a few pre-season games in Greensboro.

The Miami Heat come into the 2013 season as the reigning NBA Champions.

Their top level talent pool – LeBron James, Dwayne Wade and Chris Bosh – got deeper with the off-season addition of sharp-shooter Ray Allen from the Celtics.

LeBron spent part of his summer in London, copping his second Olympic Gold.

The Bobcats have talent, no doubt. But no one’s seen this crew on the floor together, so questions remain.

My first question: Who’s team is this? Is it Kemba Walker’s, the 6″1′ guard out of Connecticut? Or how about forward Michael Kidd-Gilchrist, the #2 overall pick in 2012 out of Kentucky?

But it’s hard to put a whole team on the back of a rookie. Maybe Ben Gordon, the wily veteran, is the center of the team. Could be one of the big men – Brendan Haywood, DaSagana Diop or Bismark Biyombo, all playing center.

Let’s not forget Ramon Sessions (another guard), late of the Lakers, or Matt Carroll, a 9th year man known for his shooting touch.

Yes, the Bobcats have talent. But do they have a team? Can they play defense and steal close games from elite squads (like Miami)?

The Miami Heat are the defending NBA Champions. Nothing’s changed – LeBron, D Wade and Chris Bosh – except the addition of the NBA’s leading all-time shooter, Ray Allen. The Heat are the team to beat in the East.

The Knicks will be in the mix, with Carmelo Anthony and Tyson Chandler fresh off their Olympic golds joined by Amar’e Stoudemire. The Celtics always find a way and the Bulls could be tough if Derrick Rose is 100% after his surgery.

The Bobcats fall into the category of “everybody else,” so they have a shot if they play together.

I expect Philly to be tough again. Washington, Cleveland and Orlando will finish in the basement. Those are my predictions for the East.

In the West, it’s all about the Lakers, with Superman Dwight Howard joining gold medalist (again) Kobe Bryant and silver medalist (again) Pau Gasol. Howard is coming off of back surgery, so his productivity is yet to be determined.

The Oklahoma City Thunder will be pressing the Lakers, with a returning crew led by Olympians Kevin Durant (gold), Russell Westbrook (gold) and Serge Ibaka (silver). Coming of the bench for OKC is James Hardin (gold). That’s a lot of Olympic hardware for OKC.

The rest of the West is a toss up.