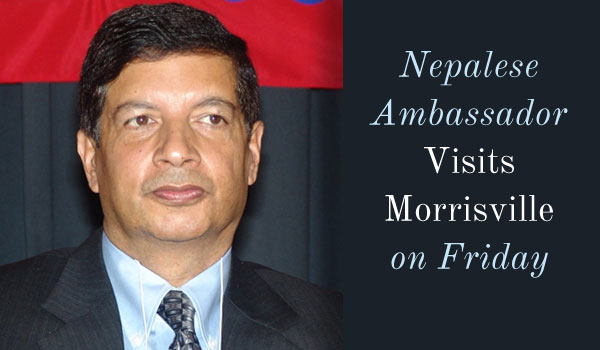 Morrisville may be a small town, but it’s increasingly steeping onto the big stage as a place with one of the highest concentrations of super-educated, super-successful Asians in America. Case-in-point: a visit to MSV by the Nepalese Ambassador to the U.S. on Friday.

Here’s the official word from Town of Morrisville:

Ambassador Shankar Sharma, Nepalese Ambassador to the United States, will be visiting Morrisville on Friday, October 19. Hosted by the Triangle Nepalese Association and Council Member Steve Rao, there will be an event held at Morrisville Town Hall, 100 Town Hall Drive, at 6 pm.

The purpose of the meeting is to facilitate cultural and economic exchange between Nepal and the Triangle region, with the focus being on Morrisville. Approximately 100 Nepalese immigrants are currently living in Morrisville.

Ambassador Sharma’s visit to Morrisville is part of a 3 day visit to the area.

Dr. Sharma has a Ph.D. in economics from the University of Hawaii. He was Vice-Chairman of the National Planning Commission, Nepal from 2002 to 2006.

Not the Only Ambassador

Last Sunday, Nirupama Rao, the Ambassador of India to the U.S., visited the Hindu Society Temple in Morrisville.

Visit to Morrisville by Nepalese Ambassador to the United States
Friday, October 19, 2012
6 PM