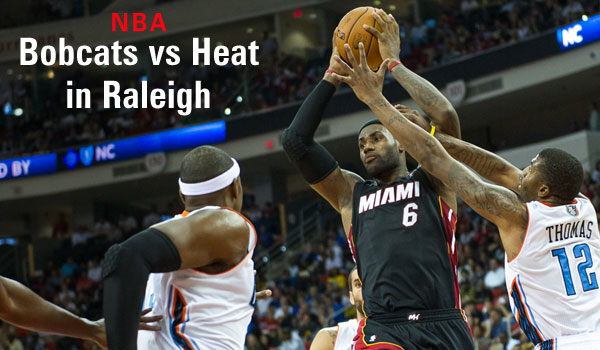 Story by Hal Goodtree and photos by Tom Mousseau.

Raleigh, NC – The pink duct tape on the floor expanded the lane and the 3-point arc at the PNC Center last night. The NBA had come to Raleigh.

Bobcats vs Heat in Raleigh

The NBA season starts next week. But the Bobcats brought a late pre-season game to Raleigh on Tuesday night. Their rival was the Miami Heat, reigning NBA Champions. Almost 18,000 fans showed up, a potent demonstration that pro basketball has a strong fan base in the Triangle. 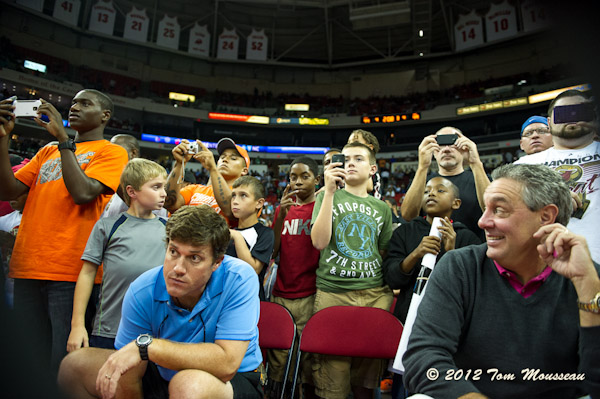 The Charlotte Bobcats have talent and they have potential. Let me tell you where it’s working and where it’s not.

The front court for the Cats looks pretty good. Start with former Blue Devil Gerald Henderson. He looks tougher this year and more aggressive. He’s a good shooter but didn’t settle for jump shots, repeatedly taking it the hole for his little baby jump-hook. 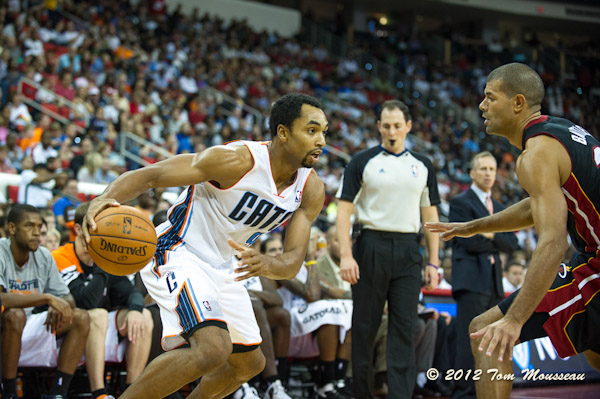 At the point, you have two talented guards, both very different players.

First, there’s Kemba Walker. Like Henderson, he’s seems tougher this year, his second in the NBA. He’s fearless (if occasionally wild) in his relentless drives to the hoop, always putting pressure on the defense when the ball is in his hand.

The Heat trapped when Walker had the ball, turning him over a few times. He’s got to learn to break the trap or he’ll be seeing it all year. 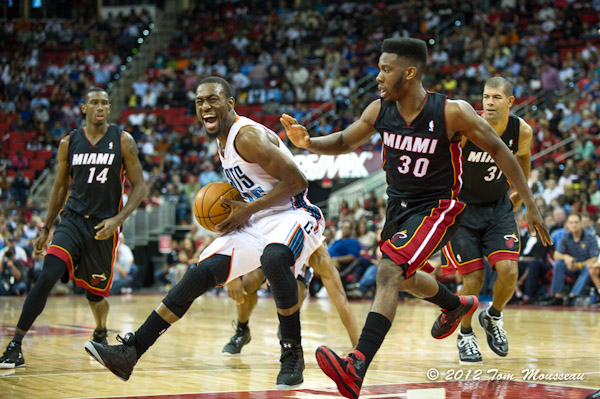 The other point guard is Ramon Sessions, late of the L.A. Lakers. Sessions is cool, smooth and under control. He’s an effortless scorer, taking what the defense gives him but never forcing the issue. Sessions is a willing passer and was able to break the trap. 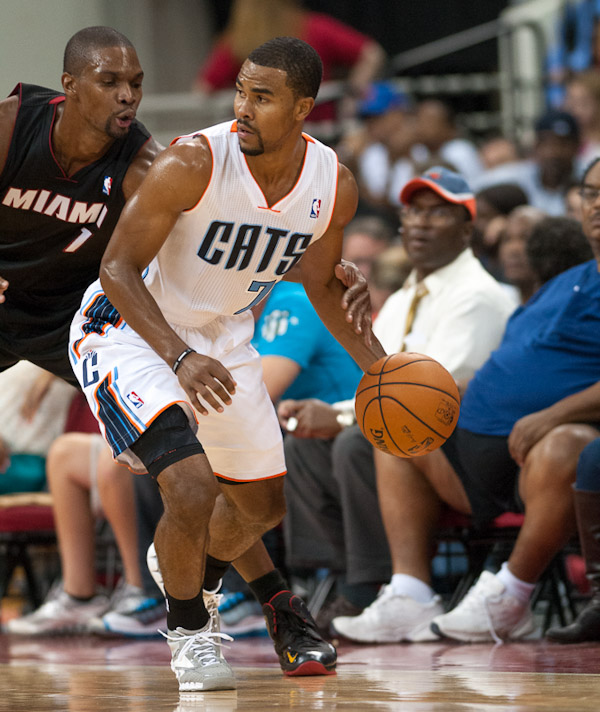 The problem here is that you have three guys who all deserve big minutes, but only two positions. Neither Henderson, Walker nor Sessions has the size to play forward.

At forward, Michael Kidd-Gilchrist, the number 2 pick in the last NBA draft, will gain some size and grow to be a good NBA player. On Tuesday night, he looked pretty tentative, only finding his groove on one or two plays.

Tyrus Thomas also saw big minutes on Tuesday night. He can be a force on the floor, but only showed it in flashes. Maybe it’s because of how much time the guards have the ball in their hands. Get used to it Ty – the Cats have an abundance of guards. Thomas has to learn to move better without the ball and keep his head in every play.

Up front, the crowd in Raleigh saw Brendan Haywood, Bismack Biyombo and DeSagana Diop play center for the Bobcats. None of them could stop Bosh. They will not stop Pau Gasol or Dwight Howard either.

Bismack Biyombo is a fan favorite – a hustle player who shows his passion every minute he’s on the floor. But Biz needs to hit the books. On one play, he fouled Ray Allen in the act of shooting. The shot bounced in and Allen sank the free throw. Note to Biz – don’t foul one of the leading shooters in NBA history on a jumper. 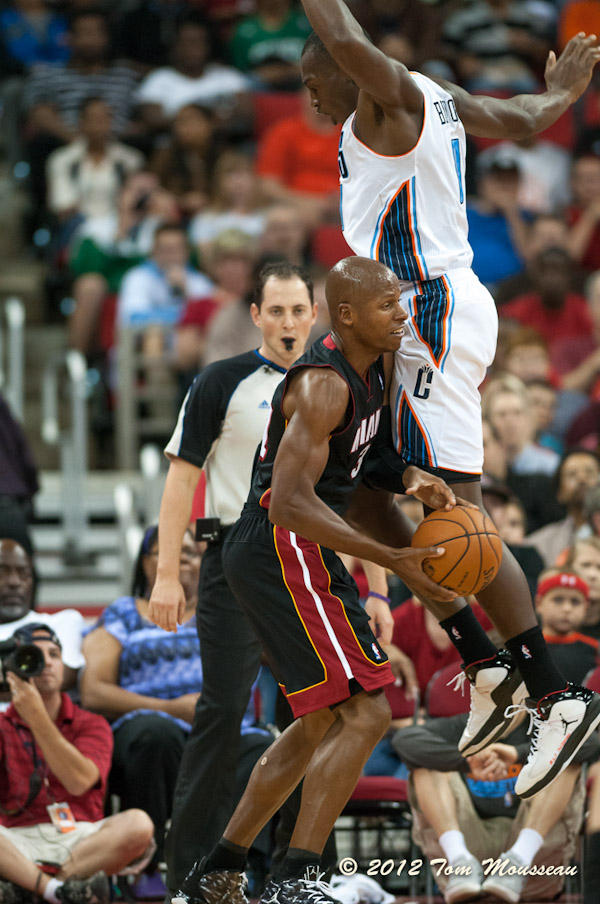 On the very next play, Ray had the ball behind the three point line and Biz backed off. As veteran coach and commentator Doug Collins likes to say, KYP – Know Your Personnel. Ray looked at Biz like he was crazy, then drained the triple.

So here’s the problem – lots of talent in the back court but a muddle upfront. Kidd-Gilchrist is several seasons away from his potential and the big men are going to get eaten up.

In the end, Spoelstra kept Bosh and James on the bench and let Allen plus the scrubs face the Cats. It got close at the end, but the Heat bench was able to dispatch the Bobcats starters, 98-92. 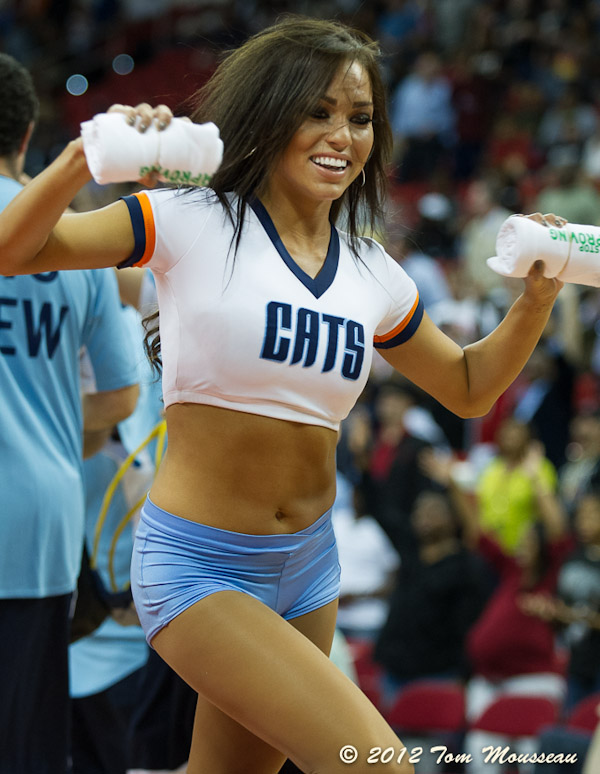 The Heat looks as good or better than they did last year. Chris Bosh looked season-ready, showing off an array of spin moves throughout the game, scoring at will from inside and out. Coming off post-season surgery, Bosh looks ready to go. 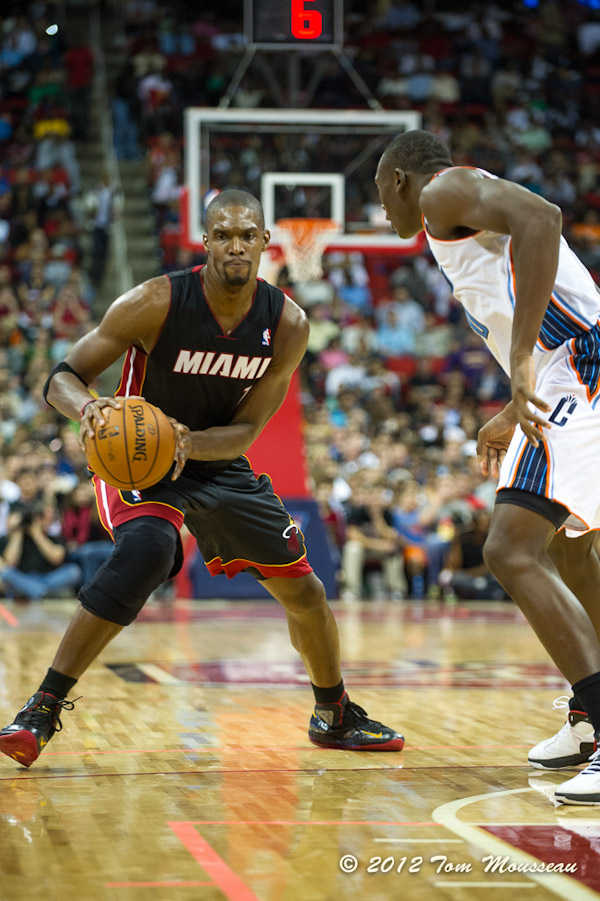 Dwayne Wade worked up a sweat in pre-game warm ups, but did not play.

LeBron James is a force of nature. He looked healthy, strong and focused. James stole the ball on the first Bobcats possession of the game and threw a perfect alley-oop for a bucket. On the next play, it was a thunder dunk down the lane. James did not play many minutes, but whenever he was on the floor, he was everywhere, variously playing the disrupter, the ball-handler, the passer and the scorer. 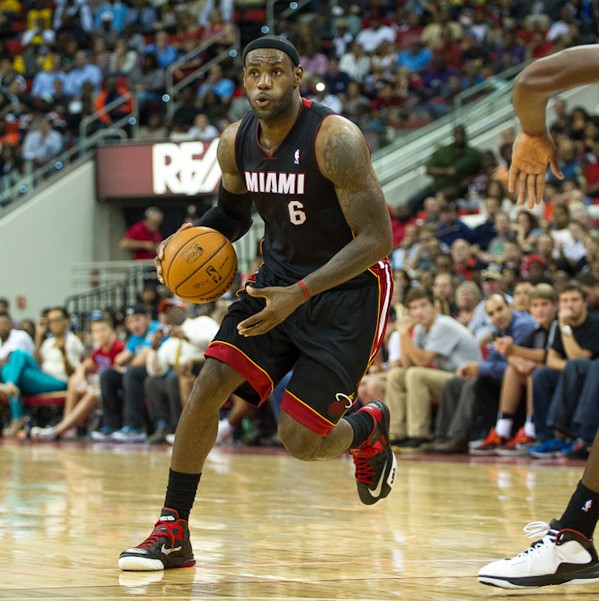 The Heat may be a better team than last year (scary) with the addition of Ray Allen. Ray played big minutes last night. Many times, he was the only veteran on the floor with a team of bench guys. 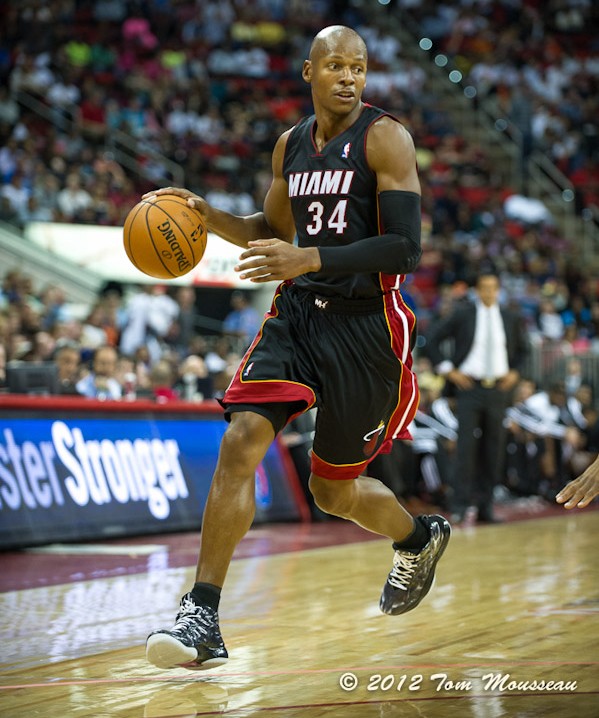 At one point, LeBron got caught up in a charge or blocking foul and responded strognly to the official’s call. Ray Allen immediately stepped in and pushed his MVP teammate away. When Heat coach Eric Spoelstra started jawing the ref, Allen pushed the coach away.

As far as the rest of the second team-ers on the floor for Miami most of the game (Mario Chalmers and Joel Anthony did not play), it’s a squad looking for an identity. One standout was Garrett Temple, who played point-guard for much of the game. Temple handled the ball well and made good decisions.

Also worth mentioning, Rashard Lewis is a quality player and a veteran. He’s a good pick-up for the Heat.

And a shout to local hero Shane Battier. He played his usual nonsense, heads-up game, although he missed a couple of open threes from the corner. The crowd cheered everytime he touched the ball.

The Fracas on the Floor

As soon as the game was over, a TV news crew grabbed LeBron and brought him out onto the floor for an interview.

Most people were streaming out, but a lot of fans in the vicinity of the Heat bench moved down to get a closer look.

LeBron crossed the floor to shake hands with a kid and some fans started coming onto the court. Team officials pulled LeBron toward the locker rooms as more and more fans crowded around. Some were yelling hysterically like it was a Beatles concert in 1964.  The press of people got pretty intense for a moment before LeBron could escape to the locker room.

I watched for a while and then headed out. Presumably, the fans waited just to catch a glimpse of LeBron (a lot of #6 jerseys in the crowd), or even just the bus he was in.

Maybe the NBA has a future in Raleigh. 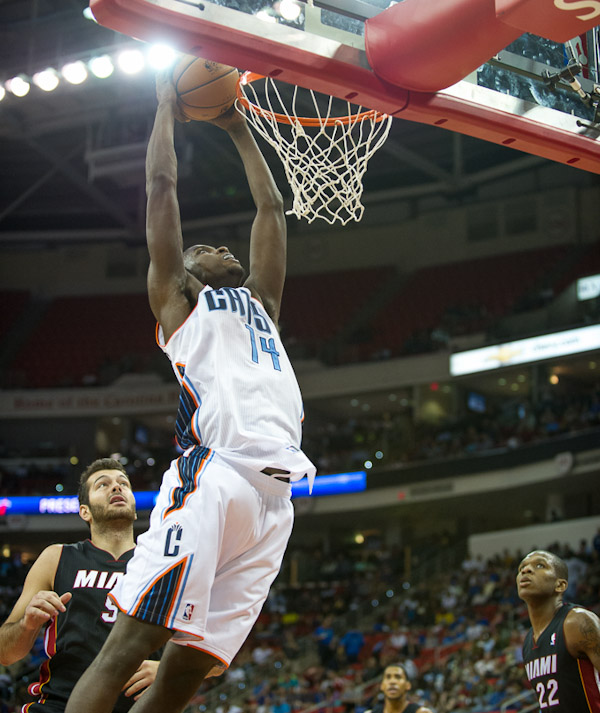