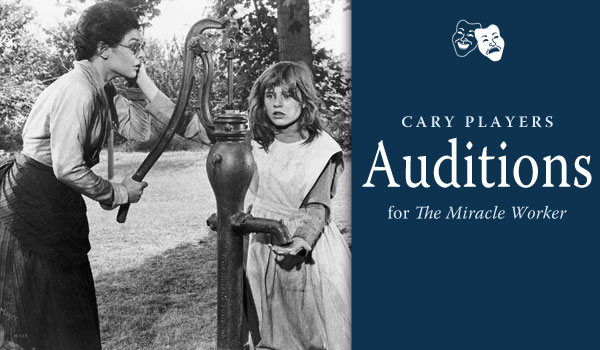 Cary, NC – Cary Players always has something in production. Now and again, it’s good to remind aspiring actors and actresses of upcoming auditions for future shows.

The Show Must Go On

Theater has become a 365 day a year occupation in Cary, with some show or another on stage, in production or prepping.

One of the most important parts of prepping a show is auditions for the cast.

So You Want to Be in Theater

If you’ve never been in a show, it’s a consuming business. From learning lines to the first table read and from wardrobe fittings to the dress rehearsal, it takes a lot of work to put on a quality show.

As rehearsals progress, the pace (and tension) builds for cast and crew. It is an understatement to say that theater is a bonding experience. The friends you make in just a few weeks generally stay friends for life. It’s like you’ve gone through a war together.

About the Miracle Worker

The Miracle Worker, of course, is the story of Helen Keller, a young girl who is blind and deaf, and her teacher, Annie Sullivan. The work is derived from The Autobiography of Helen Keller and was popularized in the Academy Award winning 1962 film starring Patty Duke and Anne Bancroft.

The audition info lists 11 principal roles and a number of supporting cast members.

Decorating: A Guide to Kitchen Countertops
Scroll to top