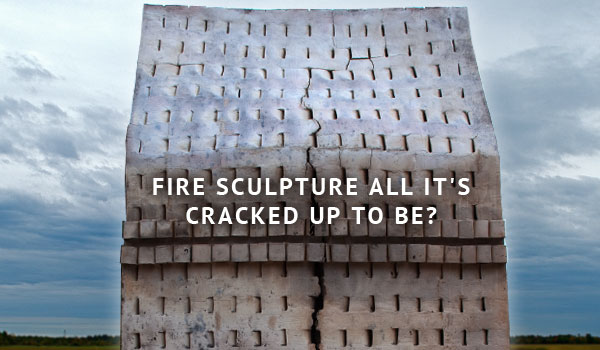 Story by Lindsey Chester. Photo by Hal Goodtree. Ms. Chester is a member of the Town’s Parks & Rec Advisory Board.

Cary, NC- The Town of Cary recently sponsored a unique art event, titled Monumental Fire by Nina Hole that was created on-site and publicly revealed on November 2. Now that the dust has literally settled, we have heard some feedback from the public and wanted to share.

At a Parks & Rec meeting, I heard stories about a crack in the sculpture. Another friend described a large crack and a roof that was caved in. This sounded serious, so I decided to head over to the Performance Green on Academy Street, opposite the Cary Arts Center, where the sculpture resides.

What I found is pictured above. The crack is present, but not life-threatening.

Part of the Art

Lyman Collins, Cultural Arts Manager for the Town, had this to say about the nature of this type of large-scale public art:

The crack is a natural part of the process when clay is fired at very high temperatures and then exposed to much lower temperatures.  There is no way to predict where or how such cracks may appear but it is a part of the piece itself.  Artist Nina Hole inspected the piece prior to her departure and she was not alarmed nor concerned.  There is no evidence that it has affected the structural integrity of the piece and just serves to give it additional character.

Lyman went on to add:

I have gone on Nina’s website and looked and her other pieces there and it is easy to see that cracks such as this happen in virtually all of her pieces.  In no way is it a flaw but rather part of the work itself.

Something to Talk About

Any public art piece should tests the limits of the public. What only 70 years ago was considered crazy and avante guard is now readily accepted. Think Andy Warhol and Picasso didn’t hear any flack about their creations?

I learned that the ‘job’ of art is to make the viewer think, to react, to have some response. If your response is ‘yuck’ and we talk about it, then actually the art is doing a good job.

The town’s official position is that the piece met its goals. It created a wonderful experience during the building and the night of the reveal – which was enhanced with a concert and outdoor festival atmosphere open to all for free.

Lyman’s closing comments reflect some of my own feelings about public art:

It is a healthy community that has conversation and dialogue around a piece of public art and that is what we are seeing here.

What do you think? The Town is taking suggestions about presentation and ideas for enhancement. Have an idea, please post below in our comments section, just mind our comments policy and be respectful.