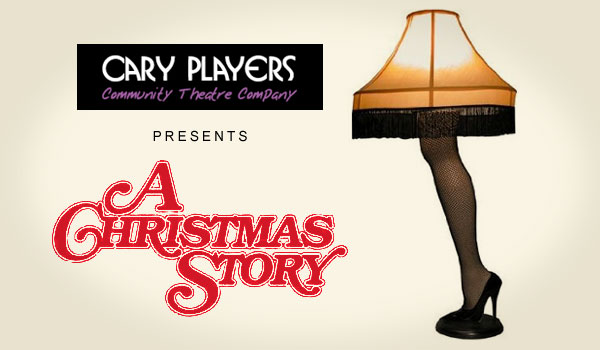 Cary, NC- The Cary Players are bringing an old favorite back to life this holiday season with 5 shows from November 30-December 3, 2012.

Last seen in Cary in 2007, Cary Players are producing A Christmas Story this December in the Cary Arts Center. They performed the play in the past back in the old Cary Elementary Media Center.

With the same anticipation young Ralphie Parker feels during his quest for the “Red Rider 200- shot, carbine-action range model air rifle,” Cary Players is eagerly preparing to present the delightful stage version of A Christmas Story in the Cary Arts Center.  Opening night is November 30 for the one- weekend-run of this Holiday classic.

Popular lines from the beloved 1983 motion picture, such as “You’ll shoot your eye out” and “I triple-dog dare you” will resonate with the audiences.

Martschenko first pitched the idea of A Christmas Story to Cary players in 2003. ”We wanted something that wasn’t being done by all the other theatre companies,” he noted.

With the first read-through the young company knew they had a crowd-pleaser on their hands. Even with limited theatrical attributes in the Old Cary Elementary Media Center, Cary Players was able to delight over 3,000 theatre-goers from 2004 to 2007.

The players moved out with the building closed for renovations and produced three radio plays in the Town Council Chambers.   Now, with a beautiful new facility and as the resident theatre group of the CAC, it’s time to bring back Jean Shepherd’s wacky and wryly realistic portray of an American family’s Christmas joys.

Matt Scheduler returns to the stage in his role as “grown-up” Adult Ralph, the rich-voiced storyteller of this Yuletide-tale.

Bill LaFrankie captures the gruff exterior but soft heart of the old man. Amber Ivie is the warm and sometimes wacky mom.

As the little brother Randy, Austin Harger shows he’s not afraid to eat his oatmeal like a little piggy and in the starring role of Ralphie Parker, Joseph Gaitons reminds of all of the hopes, dreams and occasional anxiety the holiday season can offer.

Tickets are on sale now and seating is assigned.  Hurry!  You don’t want to be left out!

This family-friendly  production is recommended for ages 6 and older. The matinee on Saturday, December 1st will be Audio Described by Arts Access.