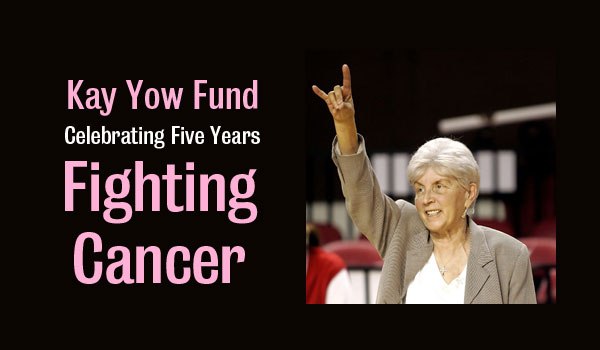 Cary, NC –  The Kay Yow Cancer Fund is hosting its For A Higher Goal Gala on Monday, December 3, 2012, at The Umstead Hotel & Spa in Cary, N.C. The Gala commemorates the five-year anniversary of the charitable organization, established by the late Kay Yow, the former N.C. State University head women’s basketball coach and Cary resident who was first diagnosed with breast cancer in 1987 and battled the disease until her passing in 2009.

The evening will include entertainment by humorist Jeanne Robertson, dinner and refreshments. More than 200 special guests and attendees are expected with tickets and sponsorship opportunity still available.

In 2007, Yow joined forces with the Women’s Basketball Coaches Association (WBCA) and The V Foundation for Cancer Research to form the Fund, committed to raise money for scientific research, assist the underserved and unify people for a common cause. Since its inception, the Fund has raised over $7 million and allocated $2.5 million for women’s cancer research and related programs, with future projects currently under review.

“Coach Yow made great strides in uniting the basketball community for a cause much greater than any on-court competition,” said Nora Lynn Finch, president, Board of Directors, Kay Yow Cancer Fund. “The Gala’s mission is to unite area residents and businesses in contribution to commemorate Yow’s determination and continue her fight to help women across the entire nation.”

After being diagnosed with breast cancer in 1987, Kay Yow made it her mission to extend and improve the lives of those battling women’s cancers.

In 2007, she joined forces with the Women’s Basketball Coaches Association (WBCA) and The V Foundation for Cancer Research to establish the Kay Yow Cancer Fund, a 501 (c) (3) charitable organization committed to being a part of finding an answer in the fight against women’s cancers through raising money for scientific research, assisting the underserved and unifying people for a common cause.

Since its inception the Kay Yow Fund has awarded the following grants.

CaryCitizen searched high and low and could not find a link to ticket sales. Is it a secret?

We finally found some info on FyiFly (?) that says ticket sales ended Nov 21.

Lori Bush: Behind the Scenes at Wake Med