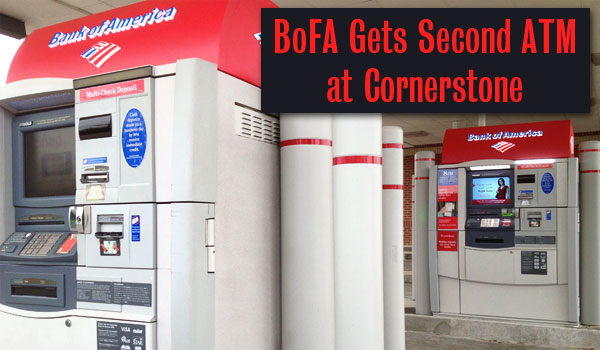 Cary, NC – Bank of America has added a second ATM at its Cornerstone location on High House Road in Cary. Small news, perhaps. Unless you’re a BoFA customer in the neighborhood.

Many BoFA branches in the area have two ATMs. The Cornerstone location had one.

It’s a busy (and growing) neighborhood at the corner of Davis and High House. Lines would often stretch 6 cars deep waiting to deposit checks or get cash.

BoFA/Cornerstone has four drive-up lanes. 3 were dedicated to pneumatic tubes and tellers. Quaint.

For those of us who live in the neighborhood, BoFA has finally (finally!) converted one lane to a second ATM.

Of Banks and Liquor Stores

When I first started my working life, I lived in a poor neighborhood in Jersey City. There were at least eight liquor stores or bodegas within a four block radius of my apartment.

There are two banks at Cornerstone. There are six banks at the corner of High House and Cary Parkway, just a mile away, and another bank near Fresh Market.

That’s nine banks within a mile of my house in Cary.

Sometimes, I wish there were more liquor stores.