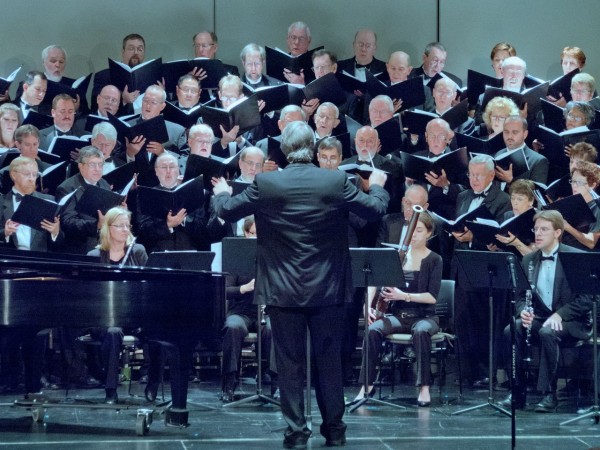 Cary, NC – Larry Speakman, artistic director for the Concert Singers of Cary is passionate about bringing choral music to Cary and has been for 22 years. The group performs their Holiday Pops Concert on Saturday, December 8, 2012 at the Cary Arts Center.

One of the biggest drivers of the group’s success is their performance of a variety of musical styles.  Early on they knew they did not want to be pegged as Broadway-style singing  show tunes. But they also wanted to branch out further than classical music. They may play modern music and even combine it with poetry, as they did in last month’s “Landscapes of American Music & Poetry”.

Larry calls their seasons “adventuresome programming” because they can span eras and musical styles. Sometimes this diversity can be a challenge when marketing, as the audience that likes a piece by Beethoven, may not dig Gershwin. But a music lover is a music lover- and during any season, there will be a great variety in what the Singers select to produce.

For the last year they have been residents of the Cary Arts Center which has given the organization some sense of permanency and less the feeling of a band of nomads. Formerly they performed in area churches whose sanctuaries could accommodate not only a large audience but also the space needed on stage for the performers who are frequently accompanied by The NC Symphony or the Triangle Chamber Orchestra.

The entire Concert Singers of Cary are an auditioned group of roughly 160 eligible singers who rehearse on Monday nights in the Cary Arts Center’s Marcus Dry room. The largest group is known as the Symphonic Choir. They are volunteers with lots of talent. Call them Cary’s “Community Choir”. Singers travel from as far away as Garner and Chapel Hill to be a part of the weekly rehearsals.

Within that group are two smaller select groups who undergo additional auditions. The “Chorale” is made up of roughly 70, balanced evenly between men and women. Within this group is the select 30 folks who make up the “Chamber Chorus” and many of these people have advanced technical training and possess a higher experience level.

Speakman was one of 5 original board members that formed the group back in the late 1980’s (The first concert was performed in 1991 at the dedication for the Cary Community Center now called Herb Young). He speaks very highly of the thought and expertise of the original board members in conceiving of the organization, stating that each brought special skills that helped the group get off the ground.

From Larry’s own experience with the Philadelphia Singers  (a unionized and highly organized group) he learned how to run a non-profit and work with a large group to create programming.  A professional singer, Larry now performs with a group out of Texas. Other original board members included Fuller Blunt, Sarah Sheffield, Mabel Howell and Barbara Brown who guided the group as a task force before becoming the first board of directors.

Larry creates the ideas for the season’s programming, works with the board of directors to figure out how they will fund it, and schedule it, and has Jennifer Myers, assistant Conductor/ Concert coordinator who makes sure the show goes on without a hitch. This season is eclectic as ever with 3 concerts remaining, the next being the Holiday Pops on December 8th. Tickets can be purchased in advance or at the door. Students are free thanks to a donation from Downtown business Stonehaven Jewelers.

Thanks to a donation from Stonehaven Jewelers, Students admitted FREE.

For information on upcoming shows, visit Concert Singers of Cary.

SAS Ranked Best Place to Work. In the World.