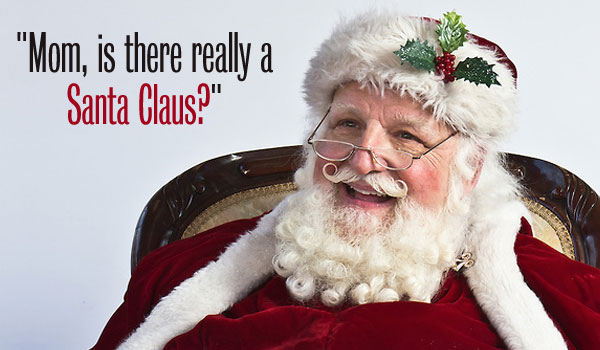 My young son approached me recently looking for the truth! Usually when he approaches me, it’s because he wants something tangible.  But this time was different. He seemed hopeless.  He looked up with sadness in his eyes, and asked, “Mom, is there really a Santa?” Instantly, my body froze.

“Mom, is there really a Santa Claus?”

There was an eerie silence. What was this question he was asking? I was expecting him to ask me something I could answer; something about the birds and the bees.  This was more than I could handle! I panicked and broke into a cold sweat!  I wanted to scream out, “Of course there is a Santa! All those gifts I have hidden for the last 10 years meant something!”  I thought it would change everything if he knew the truth.

What was the truth?  I still believe in Santa!  I believe that on this one day, Santa  exists for the homeless children of the world. That he will bring joy and end world suffering.  Or perhaps one Christmas morning, I will wake and there may even be a surprise for me. I feel that anyone with a child in their heart has a place for Santa to exist.

We sat at the table. I held his hands and saw something I had not seen before. His eyes were glazed over as if to say, “Please Mom, tell me the truth.” His expression said a thousand words. He was desperate to know the truth.  I couldn’t let him look like a fool in front of his friends. Yet, I still could not break his little heart.

There was only one thing I could do.  As I looked into his eyes, I said, “I want to believe that Santa exists and I know that someday I will have the answers I need. But for now, I enjoy the spirit of Santa at Christmas. He represents giving and kindness and that is something I will always believe in.” He stared at me for a few seconds then smiled. The silence was deafening but I could see his acceptance in the uncertainty. He seemed comforted knowing that at least this Christmas, his life as he knew it would not change.

Quite sure I had answered his question, I still felt as if I had let him down. He trusted me and I had only given him more to think about. Did he not believe in Santa, or did he not believe in Christmas? Days passed and we continued to prepare for the holiday season. I was fairly certain he had all the answers he needed when his younger sister asked him where Santa lived. He smiled at her and answered, “In our hearts.” I knew then he understood. We have never spoken about it since but I am sure one day he will pass our traditions on to his own children.

In the meantime, we will keep leaving out the milk and cookies.