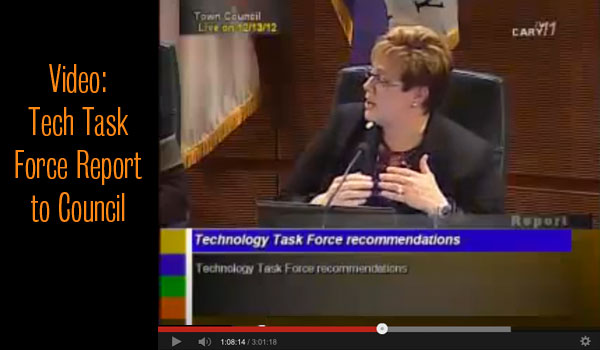 The audio encoding of the Town Council meeting is very low. You’ll have to crank up your speakers to hear the soundtrack. A lot.

Make sure you dial back your volume after watching these clips or you will be blasted out of your chair by the next sound coming from your computer.

Part 1 starts with Mayor Weinbrecht’s introduction of the Cary TTF, an overview by Council Member Lori Bush and the Powerpoint presentation by TTF Member Hal Goodtree.

Part 2 is a Q&A about the TTF Report, mostly a discussion between members of Town Council.

Cary TTF Chair Ian Henshaw summarizes the single over-arching recommendation of the Task Force at the end of the clip.

Town Council then votes, directing staff to come up with a matrix of time. cost and legal issues regarding the recommendations of the Cary TTF.

We should mention that between the two parts of the TTF Report to Council, Mayor Weinbrecht reads a proclamation honoring Cary resident and North Carolina State Senator Richard Stevens for his service in public office. Senator Stevens thanks the Mayor and Council and makes a few remarks at the end.