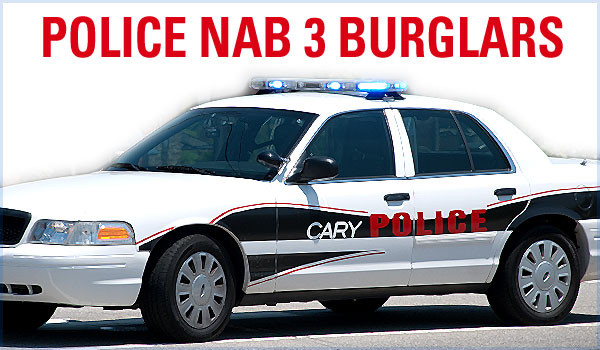 Cary, NC – Christmas may be the season of joy, but crime doesn’t take a holiday. Cary Police participated in a dramatic standoff with three burglary suspects yesterday evening, resulting in the arrest of all three.

Police Nab Burglars in the Act

“Last night’s 3-hour stalemate at a Cary apartment complex resulted in the arrest of three adults and more than a dozen charges following a report of a burglary in progress. Corey Lamar Edgerton, 22, Shelby T. Jordan, 23, and Lena Nichole Smith, 29, are currently being held at the Wake County Public Safety Center in Raleigh and face up to 14 years, 12 years and one year in jail respectively. All three adults reside at the scene of the stalemate, the 118 building of Hidden Oaks Drive, Cary.

“Thanks to an observant citizen, we are able to bring closure to two apartment burglaries all within a matter of hours,” said Capt. Don Hamilton, Criminal Investigations. “We encourage all citizens to err on the side of caution and always report suspicious behavior immediately to our 911 Center.”

Just after 2:30 p.m. on Wednesday, December 19, Town of Cary Police responded to a burglary at Hyde Park Court, where officers followed burglars to an apartment on Hidden Oaks Drive. Following a three-hour stalemate, officers were successful in making contact with the suspects. The two adult males and adult female were taken into custody without incident. Upon further investigation, a number of stolen items were recovered, including items from Hyde Park Court.

This incident is not believed to be related to a recent rash of apartment burglaries in western and central Cary.

Smith has been charged with conspiracy to commit felony breaking and entering.

While charges have been filed, anyone with information about these crimes should still consider contacting the Town of Cary Police Department at (919) 469-4324 or Cary Crime Stoppers at (919) 226-CRIM(E). Crime Stoppers pays up to $2,500 for the arrest or indictment of those responsible for committing certain types of crimes. All calls will be kept CONFIDENTIAL at caller’s request.”

Be Safe for the Holidays

Just because the egg nog is bubbling, don’t neglect the basic safety of your home, family or property.

End of the World Party