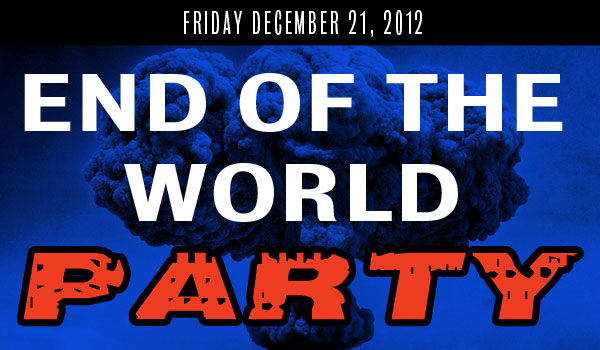 Cary, NC – The Mayans predicted the end of the world for this Friday, December 21, 2012. Go out in style with one of Cary’s favorite bands, A Fifth of Blues.

End of the World

The Mayans didn’t actually use the Gregorian calendar, so who knows – things might be off a day or two.

Scientists at NASA (and pretty much everywhere) have poo-poo’d the idea of of a world apocalypse on Friday.

However, all that science is no reason not to have a party.

You’re invited to join A Fifth of Blues, Cary’s popular party band, at RallyPoint on N. Harrison Ave this Friday for an End of the World Party.

Many people in Cary know A Fifth of Blues from other gigs at RallyPoint, Aviator Brewing and Cary Spring Daze. It’s your basic vintage dance music – R&B, Soul and Blues including Etta James, Ray Charles, B.B. King and Howlin Wolf.

Music starts at 8 PM – no cover, no minimum.

End of the World Party
with A Fifth of Blues
Friday, December 21, 2012
Music starts at 8 PM

One in a Million