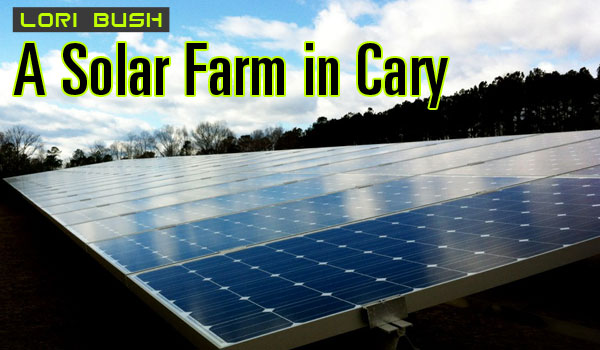 Story and photos by Lori Bush. Republished from her blog.

Cary, NC – In late December, I got a chance to visit the new solar farm located at the South Cary Water Reclamation Facility. We’ve all seen solar panels, but you haven’t seen anything like this before.  Ok, well, I haven’t. 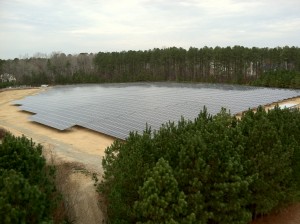 Picture from Town of Cary

This solar farm is Wake County’s largest public-private solar energy system, located on a 7 acre plot of land within our South Cary Water Reclamation Facility. FLS Energy, an Asheville, NC company, was selected at the Town’s solar energy partner.  (You may have read about them before, they installed the solar project as SAS, and have several other projects in the area.)

Not only is this our first and largest public-private partnership, it’s the beginning of a number of installations that will not only support our sustainability efforts, but will also make money for the town. Yep, that’s right.  Without any upfront costs or maintenance costs during the life of the lease, the Town will generate lease revenue of $35,000 a year for this part of the project, alone.  (The town’s lease is for 20 years.)

Yes, really.  In 2007 the NC General Assembly mandated that electric utilities meet 12.5 percent of their electric sources through some sort of renewable means (wind, solar, etc.)  At that time, the Town started looking into ways to of installing solar equipment at various locations

The solar photovoltaic collector modules are the main components of the panels and are pressed between glass.  When I got up close to these panels, they were much thinner than I would have ever thought.

Solar energy is made when sunlight hits the semiconducting layer.  Since one is positively charged and the other is negatively charged the free electrons flow towards the positive semi-conducting layer, thereby creating an electric current.  This is direct current, often referred to as DC – but it needs to be converted to alternating current so it can be sent to the grid.  And that’s what this system does – sends the current generated to the grid for all of the community to consume.

This location will generate approximately 1.89 megawatts of electricity. That’s 5,918 solar panels generating enough energy to power 174 homes and offset 1,772 tons of greenhouse gas emissions annually.   As the mayor stated in his remarks – that’s the size of some of our smaller neighborhoods such as Jamieson Park, that isn’t far from the facility. 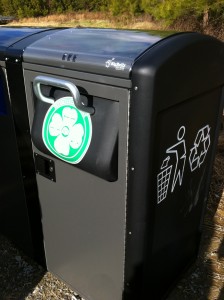 Also making an appearance at the event were the town’s Hybrid Trash truck (it gets about 4+ miles/gallon to the 1+ mile/gallon of the traditional trash truck), the Town’s hybrid car and electric car, and a solar trash can.

Our one and only solar trash can, a Big Belly, is so cool.  A cool trash can, yes, I said it.  It’s a trash compactor, powered by solar energy, that “phones home” when it’s full.  The town is trying it out, for now, and hopes that the placement of something like this can reduce labor and fuel costs, and vehicle wear-and-tear.  Plus, like I said, it’s cool.

There’s a number of sustainability efforts going on in the town – you can read more about them, here.  (I hope to write up more soon.)  And our Environmental Advisory Board continues to work closely with the town, and our Sustainability Manager to review our programs and efforts along the way.  Thanks to everyone who works so hard to make our Town a leader in being green; leading by example, and getting the word out.

Town staff did a great job setting up the event – there was a big switch in the shape of a sun, and a snow globe that was “turned on” when the switch was “flipped.”  Even hot coffee and cider, along with “sun kissed” cookies.  You gotta love the fun our town staff likes to have.