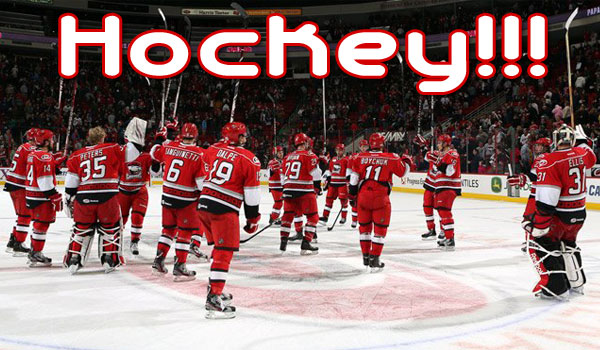 Story by Bob Fennel. Photo from Charlotte Checkers on Facebook.

Cary, NC – The last 24 hours have been full of hockey news for Triangle hockey fans. USA beat Sweden in the Junior Championships, the NHL finally settled with the players union and the Checkers trounced the Admirals at PNC Arena in Raleigh.

First, the USA team won the World Junior Championship. Saturday vs Sweden, the reigning champs, USA won 3-1 in the Championship game behind outstanding goal tending by John Gibson and a very strong defense.

The NHL and NHLPA came to a tentative agreement at about 5 am Sunday morning after a marathon negotiating session.  Both the owners and players have to ratify the agreement. But the good news is NHL hockey is back in the Triangle.

While news of the NHL tentative agreement is exciting, there was live hockey at PNC Arena on Sunday afternoon as the Charlotte Checkers beat the Norfolk Admirals, 3-1 in front of a sellout crowd with the upper level unavailable.  Checkers fans came in force as there were busloads that made the trek from Charlotte.

Possibly because many of the Hurricanes coaching staff were watching, the Checkers started off strong showing both fluid offense and solid defense.   The top two lines of the Checkers have several players from the Canes and it showed.

With Tuomo Ruutu out for what may be the regular season, the door opens up big time for several Checkers. Zac Dalpe had a great game scoring a goal and an assist and Tim Wallace had 2 assists.   Even though this was a Checkers game, it was great to see the familiar red uniforms on the ice.

Jeremy Welsh wears #15 and at times was checking like Canes #15, Ruutu.

Jerome Samson, #17, fought hard in a corner that would have made Mr. 17, Rod Brind’Amour, proud.

After a loose puck was picked up in the neutral zone by the Admirals for what would have been an odd man advantage, Zach Boychuk made a great steal by coming from behind, lifting the stick and collecting the puck for a clear.

Captain Brett Sutter got called for a 5 minute major boarding penalty that also drew a game misconduct at 9:48 of the first, killing the Checkers momentum, as they had a 7-3 shot advantage.  The Admirals wasted little time scoring as Patrick Maroon picked up a soft rebound near the right faceoff circle, skated to the high slot and lifted a shot over goalie Dan Ellis’ shoulder.

During the 5 minute power play, both Boychuk and Dalpe played exceptionally well as their forechecking deep in the Admirals zone burnt a lot of time.

Late in the period, a couple of the bigger players, Brett Bellemore of the Checkers and Josh Brittain of the Admirals paired off drawing 5 minute fighting penalties.

If time of possession was kept, while the Checkers probably had a slight advantage in the first, they completely dominated the second.

Several Checkers stepped up, notably Justin Faulk and Bobby Sanguinetti on defense, Boychuk, Dalpe, Drayson Bowman and Samson on offense. All have NHL credentials in speed and skill.

Faulk was very impressive even with wearing a cage for an injury received a few games ago.  He appeared to have put on some weight over the summer and the way he handled several Admirals, it must have been all muscle.  In addition to his physical presence, he is such a smart player.  It’s no surprise he leads the team in assists as he has a quick stick to open men.

Boychuk made a full circle around the perimeter of the Admirals end, holding off several defenders then making a nice centering pass in the fat part of the slot.

Sanguinetti took what coaches call a smart penalty as the puck bounced over a stick giving the Admirals a potential 2 man advantage in the Checkers zone. The Checkers penalty-killing unit was very effective with Boychuk and Welsh showing good on ice chemistry.

Late in the period, after a crisp pass from Tim Wallace, Dalpe skated from the left face off circle to the slot, waited patiently and put a pretty shot high glove side to tie the game.

Just a few minutes later, the Checkers had a great chance after some nifty give and go passing between Boychuk and Welsh with Boychuk taking a quick shot only to be denied by Admirals goalie Frederik Andersen.

Early in the third, Wallace won a battle along the boards, passed to Chris Terry who skated to the crease, deked a short side shot, then with arms stretched out, put a goal in on the open right side of the net.   A short while later, Bowman made a back-check so similar to Boychuk’s earlier that credit has to go to the coaching staff.

Goalie Dan Ellis had good control on directing shots to the sideboards.  Ellis has more NHL experience than Justin Peters and may get the call up to the Canes when the season starts.

Another indication of good coaching was watching the stick positioning of Sean Dolan.  With Wallace in the box for elbowing, Dolan was the up-top forward, ala Jussi Jokenin or Brandon Sutter, between the 2 Admiral defensemen in the Admirals end.  Dolan blocked a pass that forced a restart, eating time on the power play.

Dalpe put the game on ice when he used his strength to get a pass over to Samson who took a quick shot that gave the Checkers a lock on the 3-1 win. Daple finished with an impressive +3 rating and should be one of the players the Canes will take a hard look at this week.

Ain’t social media great? The Checkers have made good use of it with a terrific slideshow of the game on Flickr. Just wish they’d included the photographer’s name so we could give credit where credit is due.

History Scholarship Up for Grabs