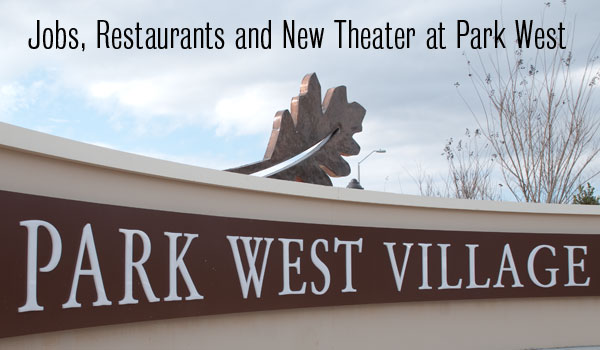 Morrisville, NC – More restaurants, a new movie theater and some jobs are coming to Park West Village in the coming weeks. Here’s the run-down.

Park West Village continues their build-out at the corner of Cary Parkway and Chapel Hill Road in Morrisville.

Recently, a Chili’s opened on the Chapel Hill Road side of Park West next to Travinia (the Kildaire Farm Chili’s location has closed). Soon the Stone Theater Park West 14 will open, after several delays, and along with it, a few new restaurants.

Notably: The Wine Guy,  Noodles and Company, and Bad Daddy’s Burger, all small chains that promise great food to consume before or after a flick.

The Wine Guy Wine Shop & Bistro hails from Ohio with five locations. This will be the first one in North Carolina.

Husband and wife team Craig and Laura Decker own the concept started by Craig who has vast experience in the beverage industry and even co-hosted a wine and food show in Ohio before starting his brand. Craig’s years in the catering and wine industries shaped the restaurant that he is now expanding outside his home state.

The Noodle and Company concept is based on everyone’s love of noodles and all things pasta.  They fix up everything from Mac and Cheese to Asian style noodles made to order – all made quickly and served with style for around $8.

The company founder, Aaron Kennedy, came up with the concept of different ethnic cuisines all being Noodle based and served under one roof  in 1995. From one restaurant in Denver, he has expanded to hundreds around the country.

Bad Daddy’s Burgers- just like the concept sounds – they aim to have the baddest burgers on the planet. They are also big on desserts and beers.

And what we have all been waiting for : The new Movie Theater. Stone Cinemas is opening a 14 screen mega picture theater soon. Originally slated to open its doors before Christmas, plans delayed opening.

The new cinema is looking for staff at this time. Visit StoneTheatres.com for more info.