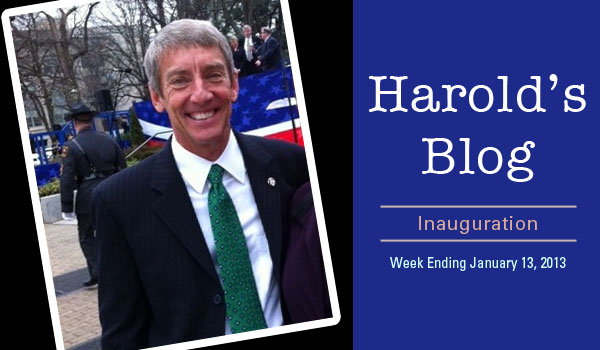 Cary, NC – This week kept me busy with a work session, council meeting, and an inauguration ceremony.

Council member questions included the Land Development Ordinance Amendments to repeal the Roads APF ordinance, recommendations on removing the Cary Parkway Extension from the Comprehensive Transportation Plan, access to the proposed Carpenter Park, and appointees to the Cary Community Plan.

Based on council discussion and length of the agenda my prediction was that the council meeting would go to 10 PM.

Tuesday started with a short meeting that included the town manager and the director of engineering. We discussed an item that will be appearing on next week’s CAMPO (Capital Area Metropolitan Planning Organization) agenda.

Tuesday night we held a work session to hear and approve the goals from our six advisory boards. Each advisory board’s chair presented the goals agreed on by each board/commission. The council then asked questions and voted on the goals. All goals were unanimously approved as presented. To review the goals go to http://www.townofcary.org/Town_Council/Agendas___Minutes/Staff_Reports/TC13-03.htm.

Wednesday I met with about a dozen folks who were part of the Mayor’s Task Force On Disabilities. Despite their name they are not affiliated with the town BUT they work very hard for Cary citizens with disabilities.

In my meeting with them we talked about difficulties they have with transportation, public access, information, and other issues. We agreed to work together to find answers to their questions about their various issues.

Hopefully the town will be able to provide assistance in some areas. It is also my hope that private organizations will be able to pitch in as well. So if you are looking for a local mission this might be the cause for you.

Thursday the council had one of their longest meetings that lasted close to six hours which made for a rough day at my paying job on Friday.

There were five public hearings, two of which were related to the repeal of the Roads Adequate Public Facilities Ordinance and one which was a quasi-judicial hearing for 100 townhomes. There were several speakers for the Roads APF. Most were developers or had developer interest.

Mostly they expressed concern about council moving too fast to repeal the ordinance and the proposed interim changes such as requiring traffic studies. The reason the council is moving quickly is because a Supreme Court ruling last August now puts our Roads APF in question. It is our fiduciary duty to respond to changes in law as quickly as possible. After the council discussion to repeal the Roads APF there was a discussion about the interim proposal to increase Transportation Development fees charged to development.

What are Transportation Development Fees? These are fees based on the cost (impact) the development will have on roads and are referred to as Impact Fees.

By removing the Roads APF the town will lose some road mitigation required by developers and thus road improvements. An increase in fees, which will bring us to roughly 50% of cost, will help absorb some of the mitigation loss and lessen the burden on the taxpayer. It is important to know that if the developer that causes the impact doesn’t pay for the impact then the citizens will have to OR the service level will drop. This has always been a plank in every campaign I have run. Of course it is strongly opposed by the Homebuilders Association and some council members. The Roads APF repeal and other changes are scheduled to come back to council for a final vote later in the month.

Council also had several tough decisions to make. We voted unanimously to take the Cary Parkway extension off the Comprehensive Transportation Plan. This means it will end at Holly Springs Road until the property in front of it builds. At that time the property will be required to provide a road for access that will probably connect to Campbell Road. But that road will more than likely be two lanes.

The council voted 4-3 to approve the Carpenter Park with two access roads which was against the adjacent neighbors’ wishes. I was an affirmative vote and realize that may have made several people angry. However, I strongly believe this will not create the traffic and safety issues they fear.

The council also approved 35 names to serve on the Cary Community Plan Committee. These folks were chosen blindly (no names were available) by staff based on their district, race and ethnicity, age distribution, and whether or not they were dwelling owners or renters. The town was blessed with over 400 applicants. There will continue to be a need for several focus groups and it is our hope that these folks, and others, will participate in these efforts.

One interesting note, the consultant involved in the selection of names stated that he hasn’t seen this kind of participation before even from cities five times our size. Another reason why Cary is great!

Saturday I attended the inauguration ceremonies for State officers and the Governor which was a first for me.

I began the morning attending a reception held by the Secretary of State and the State Auditor. Afterwards I headed over to check in with the “distinguished guests” and get my seat assignment. All state mayors were invited and we had a back center seat (not a bad view).

With about 15 minutes before the start of the ceremony about half the seats were empty so they opened the barricades to allow the general public to sit. I guess it also looked better on TV.

The emcee was former Lt. Governor Jim Gardner who unfortunately at times made partisan comments. I assume this happens at all inaugurations. The Governor’s comments were vanilla and sounded more like a campaign speech. He mostly repeated campaign promises and spoke in generalities. However, I was very glad to hear that he wanted all parties to work together. Amen to that! They could learn from Cary!

One humorous moment was at the very end when Gardner said it was a great day and that he even applauded for Jim Hunt (one of his many cheap shots). Then he asked a bishop to give the closing benediction. The bishop said that he and Gardner had something in common that they were from the same country club where he served Gardner. And then he followed that up with “don’t talk bad about my Governor Jim Hunt.” I thought it was hilarious.

The ceremony ended around 12:30 and I headed home while many went to the parade.

Staff announced this week that as of January 01, 2013, the Town of Cary’s population is estimated at 143,728. This is an increase of 2,596 people (+1.84%) in the last year (since the January 01, 2012 estimate). Note: This population estimate is based on the reported number of Certificates of Occupancy issued in the Town.

Staff released a report on taxes and fees this week for Wake County’s twelve municipalities. This information may or may not be a surprise. Some of the interesting facts include:

Council will likely change developer fees in the short and long term to reflect the lack of mitigation from the repeal of the Roads APF.

In emails from staff the Town’s bond sale for millions of new revenue bonds to fund wastewater and water capital projects was successful.  The town locked in a very favorable average rate of 3.65% for 30 year bonds.  In addition, the Town issued $12.7 million to refinance all of the outstanding 2004 revenue bonds.   As a result of the refinancing, the town will save $2.16 million in Utility Fund interest expense over the next 17 years, which is worth $1.76 million in today’s dollars. It is important to note that there was significant demand in the bond market for Cary’s bonds. Within the two hour sale period investors placed orders for over $570 million of bonds.  We were selling less than $100 million in bonds.  Due to the high demand for our bonds, our bankers were able to adjust the prices of the bonds which lowered our average interest rate.  The decrease in the interest rates due to the high demand compared to the day’s opening market interest rate estimates saved the Town over $1 million in debt service for the Town over the 30 year life of the bonds.

In other emails staff announced the completion of the Higgins Greenway Trail renovations.Greenway includes approximately one mile of paved walking trail with several new pedestrian bridges that stretches from the 700 block of SW Maynard Road near the intersection of SW Maynard Road and Pamlico Drive to the 700 block Union Street at Dorothy Park with connections also at 131 Danforth Drive and 905 West Chatham Street. In addition, the project included intense stream restoration of an unnamed tributary of Swift Creek to improve water quality; these efforts included the installation of 13 constructed wetlands and planting over 8,000 plants to restore the natural environment and remove unwanted pollutants from entering the ecosystem. The greenway was closed for nearly two years to allow for construction and ecosystem restoration. The project’s total budget was $3.7 million; approximately $440,000 was funded through the North Carolina Ecosystem Enhancement Program, the first grant program of its kind awarded to projects that achieve the needs of urban planning, ecosystem restoration, and nitrogen reduction in an urbanized and mature residential area.

In emails from citizens this week I received criticism for not asking local businesses to stop selling certain types of guns like the mayor of Morrisville did. Here is an excerpt from my response:

“… While I understand your desire for me to take local action, it is important for you to understand that I do not have that authority. As a matter of fact, NC municipalities are limited by the general assembly (Dillon’s Rule). If we act without authority the town could be at legal risk. If we act individually without authority outside the scope of mayor we could be at personal risk. Those are the facts. While I would personally like ALL assault weapons removed from the town limits that is not my call or my authority no more than it is your authority. Likewise, I do not have authority to take local action on abortion, gay rights, national debt, etc, etc. However, I do have authority to ask that those who are the decision makers to PLEASE make changes to help my citizens. And will do my best to advocate for those changes. …”

As I have said in previous posts, I have signed a letter that speaks to this which was sent to the President and Congress.

In other emails I received a complaint for listing security at schools (which is public record), a complaint about my blogging nasty grams making the issue worse (good point), a complaint about reacting to Morrisville on speed limits rather than making good decisions (not true), a request to make the entire opportunity block a park, a complaint about our planning and development processes, and comments about Carpenter Park.

Next week is retreat week for the council. We will head down to New Bern on Thursday and return on Saturday evening. This is the time where council and staff set direction for the year and is greatly anticipated by both council and staff. Council will meet for dinner at 7 PM. This is an open meeting where council is NOT allowed to discuss business. Anyone is welcome to watch us eat and listen to us. We will be at MJ’s (216 Middle Street) in New Bern. Council members will be paying for their own meals.

Well that is all for this week and this year. My next post will be on Sunday January 20th. Please feel free to email me with a comment. Email all Town of Cary questions or comments toHarold.Weinbrecht@townofcary.org. Email personal comments to augustanat@mindspring.com.