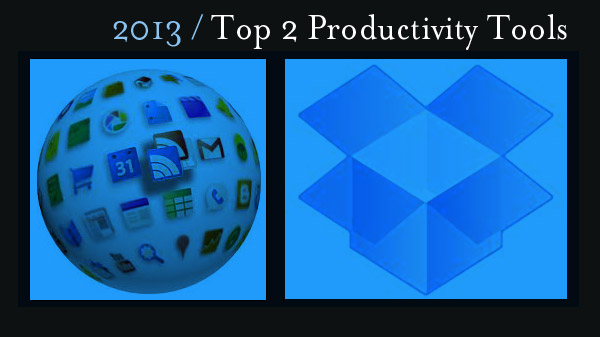 Cary, NC – The two tools for business productivity that are the subject of this post have been around for years. But for 2013, they have broken through to the “must-have” category.

Google Docs have been around for years, but a few small changes have made a big difference.

It’s the sharing that has changed. Used to be, you needed a Google account to access and edit a Google Doc. No more. Now, share a spreadsheet, document, file or folder with anyone who has an email address. You can set permissions to view only or edit.

You can collaborate in real-time. But the magic is collaborating over a longer period. Spreadsheets are especially useful in this way. They’re great for adding ideas to a list, figures to a chart or links to a shared knowledge base.

Even if you don’t have a Google account, expect someone to share a Google Doc with you in 2013. Embrace it.

The other killer app for 2013 is DropBox.

DropBox, like Google Docs, has been around for years (not quite as long as GD, but a long time). In fact, lots of filing-sharing programs exist – dozens, maybe hundreds.

The market for these file-sharing apps has started to winnow down and DropBox is among the leaders. It’s free (up to 2.5 GB), easy to use and useful. That’s why DropBox is a Top Productivity Tool for 2013.

In this case, the impetus for success is different than for Google Docs. The driver is file size – our files have gotten significantly larger in the last couple of years. Think about cell phone pictures (itself a killer app for business).

DropBox can be used from your desktop or from a browser. Pop in someone’s email address and the file (or folder) is shared with them.

Both DropBox and Google Docs aid productivity, especially for small businesses and entrepreneurs where the labor force is tight and every minute counts.

The learning curve is very small and you will save time by using these two apps in 2013.