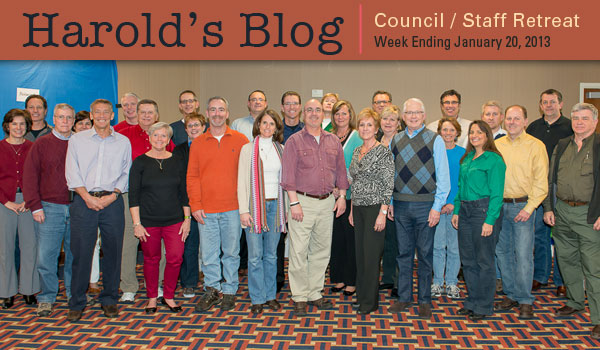 Cary, N.C. – This week’s calendar was kept clear for the most part as the council and staff prepared for the annual retreat.

My first meeting of the week was CAMPO (Capital Area Metropolitan Planning Organization) on Wednesday afternoon. There were several points of interest from this meeting:

The meeting lasted a little over an hour.

Thursday evening the Cary Town Council headed to New Bern for the annual council/staff retreat. This is a time where council and staff have all day intense sessions to set the direction of the town for the next few months. Interestingly there was no media there. Only two people, involved with development projects, were in the audience. Here are my notes and observations from each session:

Council is scheduled to repeal the APF ordinance and increase TDFs at this Thursday’s meeting. It was decided that we should table it for two weeks.

This was a great retreat with a lot of information, discussion, and decisions in a short amount of time. The retreat ended between 3:30 and 4:00 on Saturday. Then we gathered for a group picture (tradition started last year) and headed home.

In emails from staff this week we were notified of the judge’s decision on the red-light cameras case. As I have mentioned previously these cameras, which have been removed, were installed to increase safety. Most of the money collected went to the contractor providing the service and any remaining proceeds went to the Wake County Schools. Cary made absolutely no money (which is a legal requirement). Regarding the yellow light timing it is important to know that NCDOT sets the limits, not Cary. The information about the decision was received while at the retreat. Here is the response from the attorney’s office:

“After a 3 day trial, Judge Paul Ridgeway heard closing arguments from both parties and then issued his ruling in favor of the Town. The judge commended the Plaintiffs for bringing the case and commended the Town for its thoughtful defense of the case. The Town was very ably represented by Elizabeth Martineau, and she was assisted along the way by many town staff members from the Engineering and Police Departments.

Judge Ridgeway noted that the method used for calculating yellow light times is widely accepted throughout the world, and found that that Town’s red light cameras were installed in full conformance with the law.  All of the Plaintiffs’ claims for relief were denied. We are pleased with the judge’s ruling and the thoughtful consideration he gave to the case.”

I am very glad that common sense prevailed in this case.

Emails from citizens include a complaint that Cary is growing too fast. That is a perception which many have. It is important to know that Cary grew at less than 2 percent this past year and has been around 2 percent in the last couple of years. It should also be stressed that Cary has about 10,000 acres of developable land left. So future growth will be slower and will be mostly redevelopment and infill.

There were also several emails requesting the town not demolish the water tower next to Cary High school. The engineering department has responded with:

“The Town will be considering options for keeping the tank and alternatives for the class of 20XX tradition as we move forward. Our next steps will be to hire a consultant for the elevated water storage tank work. After the design team is assembled we will develop a project approach, schedule and communication plan. It will be several months before we can collect the necessary information and community feedback to make a decision.”

To put it simply, nothing is going to happen in the near future.

Other emails from citizens include a request for a downtown brewpub (the town has been trying to attract one), questions about the Jones house on Academy Street, and a request to change town ordinances to not allow big piles of dirt at construction sites.

This week will be a busy one for me. It will include a meeting with the mayors of Wake County, a dinner and meeting with Cary’s state legislators, a presentation of the state of the town to my largest audience, and a council meeting.

Well that is all for this week. My next post will be on Sunday January 27th. Please feel free to email me with a comment. Email all Town of Cary questions or comments to Harold.Weinbrecht@townofcary.org. Email personal comments to augustanat@mindspring.com.