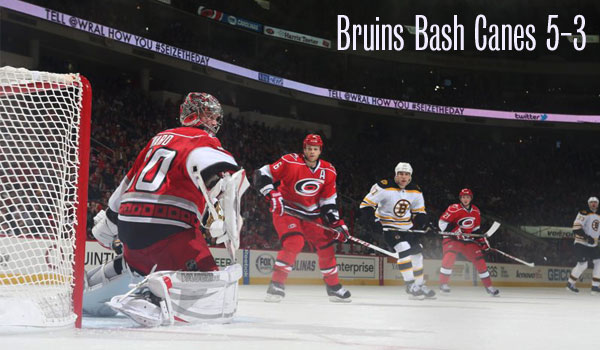 Story by Bob Fennel for CaryCitizen. Picture from Carolina Hurricanes on Facebook.

Raleigh, NC – After going over a year and a half, the Boston Bruins finally beat the Carolina Hurricanes 5-3 at the PNC Arena on Monday, January 28.

The Bruins won the opening faceoff and had a good scoring chance early when sharpshooter Tyler Seguin had a shot just inside the faceoff circle but Cam Ward made the quick glove save.

The Canes came up ice in good formation with all 3 forwards passing as if it was a warm up drill.  It ended with a good pad save by Anton Khudobin off Eric Staal.

On the next touch of the puck by Khudobin, he sent the puck over the glass for his first NHL penalty.  His teammates helped him forget that when sequoia size Zdeno Chara made an excellent cross ice pass from the point to Brad Marchand inside the left faceoff circle for a wicked one hander past Ward for a short handed goal.

Canes forward Pat Dwyer got called for interference at 5:28 putting the Bruins on a power play. The Bruins wasted little time scoring only their second powerplay goal of the short season to take an early 2-0 lead.

Possibly because of a hard play or possibly to give the Canes an emotional lift, Tim Gleason and Milan Lucic paired off with the smaller Gleason getting the better shots in early in the fighting major each earned.

At 14:50 the Canes got the needed goal to get the Caniancs excited again. Alex Semin brought the puck across the blue line, made a cross ice pass to Staal who then made a nice centering pass to Jamie McBain who came rushing down the slot for a pretty tip in.

The Canes were more physical early in the second than the Bruins.  The aggressive play led to 2 early power plays but neither showing any serious threats.

Almost midway through the period Chad LaRose did what he does best.  He was forechecking in the Bruins end, getting under the skin of anyone wearing a Bruin sweater, then drawing a penalty for another Canes powerplay.  During that powerplay, Ward had to make another good save  to stop a second short handed goal.

The next few minutes had play going up and down the ice with no real threats by either team.  Another aggressive play by LaRose looked like he drew a hook but the refs thought otherwise and didn’t make a call.

Semin had a head fake that made the Bruin defenseman look like a statue.  That allowed Semin to go in for a shot but Khudobin made the save.  On the ensuing play at the other end of the ice, Nathan Horton out skated 2 Canes who shall remain nameless, for a clear shot on Ward who came out of his net with stacking pads but Horton went high for a 3-1 Bruin lead.

Not to be outdone, the Canes struck twice in the final 3 minutes. Jordan Staal had an excellent forecheck at the Bruin blue line, stole the puck then did a soft dump in as he saw Jeff Skinner building steam.  Skinner snatched the puck, did what he does best: goes to the net, but had a defenseman on his side.  Skinner kept possession then fakes a backhander then quickly went forehand in the upper part of the net to cut the lead 3-2.

Less than a minute later, Semin had the puck deep in the Bruins’ end along the boards.  Semin saw Staal slap his stick on the ice as he started at the blue line and made a dash to the net.  Semin threaded a pass between 2 defenders on to Staal’s tape who put a shot 5-hole to tie the game 3-3 and waking up the Caniacs.

Jay Harrison took a penalty for hooking and the Canes defense was up to the task. Dwyer’s speed drew a tripping penalty after the excellent penalty kill.

The Canes again couldn’t do much and was 0-6 on power plays for the night.  Guaranteed that will be worked on during the 3 days of practice, along with boxing out in front of Ward.

Play for both teams was very cautious for most of the third.  Each team knowing one mistake could cost them the game. Most attacks were one-shot-and-done with the defensemen staying home on the blue lines.

With about 12-1/2 minutes gone, Horton had another clear shot all alone in the slot but Ward made a key stop.

The Canes were mostly playing 3 lines in the third and had Joe Corvo on the bench a fair amount of time.  With being a healthy scratch last week, makes you think he’s either not 100%, in the coaches’ dog house or being used as a potential trade candidate. The Canes had Zach Boychuk as a healthy and I think he could have been better on the ice than a player or two.  Hopefully he’ll have his time on the ice soon.

At just under 2 minutes remaining, under the ‘what were they thinking’ category, the Canes had 3 of the smallest forwards on the ice at the same time.  Granted one, Skinner, is a highly skilled player, but that line was out manned and out muscled with the larger bodied Bruins on the ice.

At 18:50 Doudie Hamilton passed to  David Krejci who sent a slap shot past Ward.  It got a little chippy after that with EStaal getting s slashing penalty and Skinner and Patrice Bergeron going off for roughing with just 8 seconds left.  Tyler Seguin added an empty netter closing the game at 5-3.

Weekend: Dinner, Dancing and a Show