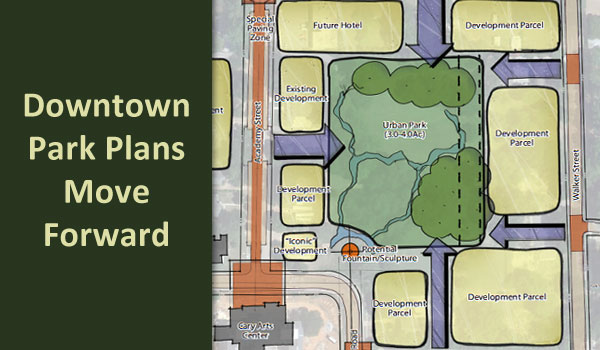 Cary, NC – Downtown, across from Cary Arts Center, is a 13-acre assemblage of land called The Opportunity Site. That’s because it represents a significant opportunity for the community to put something useful in that space. Now, plans are moving forward to seize the opportunity and create a downtown park.

We recently wrote about Town Manager Ben Shivar’s presentation to the Heart of Cary Association on plans for the Opportunity Site. In that presentation, Shivar unveiled the results of a charrette with 11 designers. The charrette created a basic outline or loose plan that the town can now use as a guide when speaking with architects and developers to plan how the site will grow and develop.

[Editor’s Note: “Charrette” comes from the French, and means “chariot” or “cart.” A “charrette” was used to collect artwork from students at Ecole des Beaux-Arts in the late 19th century, as described by Emile Zola in his novel “L’Oeuvre.”]

Ed Gawf, Downtown Development Manager, is currently presenting the results of the charrette along with a brochure to interested area groups to get some feed back.

The response to the work already done has been favorable. One oft repeated comment was that folks feel we have had enough input sessions over the years, and many want to see something happen. Readers may recall that original plans for downtown included a performing arts center, a large parking deck, a sculpture park among other things.

This new guide makes room for a park to occupy 3-4 acres in the current area where there’s an open meadow. The Walker Street side may be developed with some apartments and town homes. The new Hotel will reside at the northwest corner along Park and Academy. There may be a permanent structure for the farmer’s market (such as exists in Durham or in Raleigh).

Gawf stressed that the park could get bigger if it needs to be and that the town will focus first and foremost on its creation. Priorities here are a water feature, maybe fountain, ponds, and interactivity. Many folks are hoping for an attraction such as a permanent skating rink, carousel or band stand. These are all under consideration.

Nothing ever seems to move as fast as citizens would like. Below see the projected schedule for completion of the Downtown Park. Design team selection and site plan creation take time, actual construction will take approximately 1 year.

Take a look for yourself at the plans and the downtown design charrette. If you have an idea or a question, leave us a comment.

Downtown coverage on CaryCitizen is sponsored in part by the Heart of Cary Association meeting. HoCA meets the first Thursday of every month at the Matthews House in Downtown Cary, 8am.