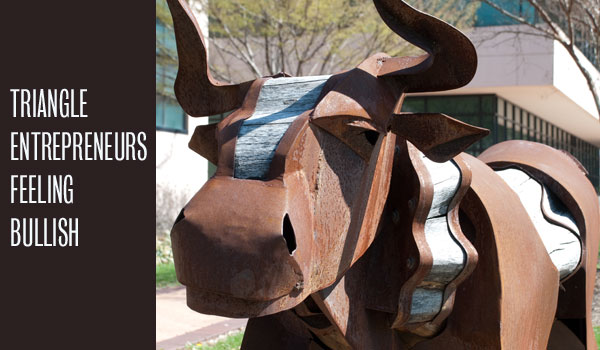 Cary, NC – The Entrepreneurs’ Organization (EO) just released their Global Entrepreneur Indicator, a semi-annual survey of 8,000 entrepreneurs across 40 countries. As it turns out, entrepreneurs in the Triangle are feeling pretty good about the prospects for 2013.

The survey is designed to predict economic trends in a number of areas, including job creation, profits, debt loads, economic forecasting, and the overall business environment.

Results are broken down by region. Key results from EO’s Raleigh-Durham chapter include:

The Raleigh-Durham chapter of EO is comprised of 40 companies, representing $327 million in sales and 3,644 employees. EO members are business owners who achieve annual revenues in excess of $1 million dollars.

“This data is yet another example of the strength of the Triangle’s entrepreneurial community,” said Matt Zemon, communications chair, EO Raleigh-Durham, and president & CEO, American Support. “Despite continued concerns about the global economy, our members continued to create jobs and achieve real success.”