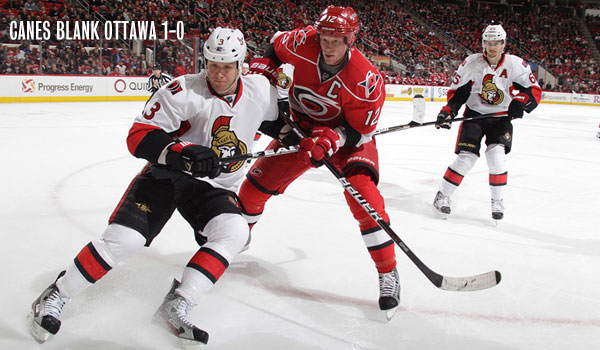 Raleigh, NC – Just over the border from Cary, The Carolina Hurricanes beat the Ottawa Senators 1-0 Friday February 1 at the PNC Arena in front of another sellout crowd.

The Senators are off to a great start.  They’re first in the Eastern Conference with goalie Craig Andersson’s light-out numbers of .99 GAA and .967 save percentage.  All Star center Jason Spezza is out, possibly for the season after back surgery this week.  That was a shame for Canes fans as he’s a great player to watch.

With just 13 seconds gone in the game, Drayson Bowman got called for a virtual boarding call.  He was 8 feet off the boards and check, knocking a Senator to the ice.  The Canes worked on both the powerplay and man down situations during the 3 day break. The defense did an excellent job and limited the Senators to just one weak, shot on Dan Ellis.

Andreas Nodl, called up from the Checkers earlier in the week, had the best shot for both teams during the powerplay.  After getting back to 5 skaters, the Canes offense kept the puck in the offensive zone, getting off solid shots only to have Andersson add to his league leading numbers.

A hustle play by Bowman caused Marc Methot to hook Bowman. The Canes powerplay units were different than their first 5 games.  Unfortunately the results were the same: no goals, few shots.

Halfway through the period, Alex Semin made a great defensive play.  With the puck loose at the Sens blue line, the 3 Senator forwards grabbed the puck for a quick 3-on1.  Semin put on the afterburners and stole the puck from the center to thwart any threat. Plays like that will not make highlight films but are outstanding hockey.

With 4:15 left, Joe Corvo cleared the puck to center ice.  Semin carried the puck into the Sens zone at the left point along the boards.  He zigged and zagged past 2 defenders to the middle of the ice.  Having the scoring mentality he has and seeing both Eric Staal and Juri Tlusty crossing in front of the goal, Semin dumped the puck towards the net.  Staal out muscled a Senator for position and redirected the puck into the upper part of the net to put the Canes up 1-0.

Early in the second, Eric Staal had the puck along the nod boards in the Senators end when he was cross checked in the back. Somehow the call was hooking but it was a Canes powerplay.

The fresh ice didn’t change the outcome: no goal and few shots. Midway in the period Jamie McBain got 4 minutes for a high stick on tough guy Chris Neil. The Canes defense was exceptional as they boxed out the Senators in front of Ellis. The forwards were active and fast with at one point, the puck was in the Sens end for about 30 seconds drawing loud cheers of approval from the Caniacs.

Future Hall of Famer Daniel Alfredsson was amazing when he had the puck.  His stick handling is among the best but the Canes defense didn’t give him an open man to pass to.

Right after the powerplay was over, the Canes had the puck deep in the Sens end. As the puck went to the side boards, Staal attempted to lift the stick of Kyle Turris, which looked good but the ref (The Law on ice) called it hooking.  Another good penalty kill by the Canes, with several key saves by Ellis, kept the score 1-0 after two.

The third started out with tight checking by both teams with more checking in each zone than center ice.  The line of Jeff Skinner, Jordan Staal and Zac Dalpe had a very good shift. Joni Pitkanen and McBain cleared the puck up to JStaal,  Staal dumped the puck deep where Dalpe used his size and speed to keep possession of the puck.  Dalpe pushed the puck back to Staal, who was tied up but got the puck over to Skinner.  Skinner faked right, got around a defender for a wicked shot.  Andersson made the save but gave up a rare sweet rebound that the Canes couldn’t put home.

Jussi Jokinen had a career night in the faceoff circle winning nearly every challenge.  Has to be those Rod Brind’Amor lessons are working.

With the Canes threatening in the Sens end, Pat Dwyer got cross checked into the goal giving the Canes another powerplay.  Ditto on the results: no goals, few shots making it a poor 0 for 4 on the powerplay.

With 1:19 left in the game Andersson was pulled for the extra skater. The Canes shut down every threat at their blue line with Bowman grabbing and shooting the puck into the empty net .2 seconds after the final buzzer.

Great game, with the defensive play outstanding.  If Ellis gave up a rebound, the defense quickly cleared the puck to the boards or out of the zone.  Fun and exciting game to watch.