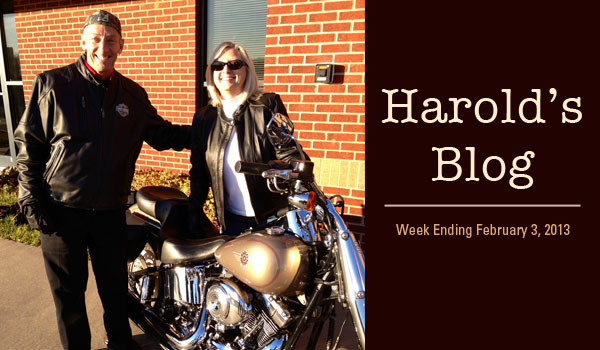 Cary, NC – This was a slow week for me as mayor. It consisted mostly of staff meetings.

Monday I met with the town clerk for our mid-year one-on-one meeting. The purpose of this meeting was to make sure the clerk department is meeting expected needs and to discuss new initiatives. We talked for over two hours and I will soon be bringing ideas from this meeting forward to the council and to the Mayors Association.

Tuesday I had the privilege of meeting with the President and Membership Chairman of MacGregor Downs Country Club. MacGregor Downs is filled with tradition and history and it was great to visit the club and learn more about this great club and neighborhood in Cary.

Wednesday I met with council member Bush and a close friend to talk about technology. We are excited about the direction the town is moving. We discussed ways to help move ideas forward and how that process is different from the corporate process.

Friday I headed over to Life Experiences to do a photo shoot with Mayor Holcombe of Morrisville for their upcoming fundraiser.

Life Experiences, Inc. is a nonprofit organization is a business which provides fulfilling employment for adults with developmental disabilities, allowing them to function as independent, productive citizens of the Triangle. Our photo shoot had the mayor and I dress up as bikers complete with doo-rags and leather jackets. The session lasted about fifteen minutes.

Friday night I attended a Mayors Association outing at the Carolina Hurricanes game. In addition to watching the Canes shut out the Senators we talked a lot about local politics. The main topics of discussion were outgoing School Board member Goldman and Morrisville council member Rao.

I had the weekend off and enjoyed spending time with my wife and youngest daughter who was home for the day. My only activity was helping a neighbor cut and remove a large tree that had fallen from the storms earlier in the week.

Emails from staff this week included the 2012 4th Quarter report. Here are some highlights from that report:

The report had over 30 pages of information.

Emails from citizens this week included one from an individual who, for years, has complained about the town’s automated meter system, how it will lose money, and will cause cancer. Of course, those claims were false and ridiculous. In fact the town is projected to save $10 million with automated meters and eliminate thousands of leaks. Now this individual is fixated on the downtown Cary Theater and has started another Letter to the Editor campaign. And of course the local newspaper, not wanting to miss another negative opportunity, prints his letters. I just hope on day they will print positive letters about the town OR even acknowledge they were wrong about things they print (e.g. the Bowden case). Whatever happened to fair and balanced?

In other emails a citizen complained that we are growing too fast (1.84% last year). Another email complained about the fire sculpture downtown. The rest of emails from citizens were invitations to various events and thanks for attending other events.

Next week will be another slow week and will include an event and an Eagle Scout ceremony.

Well that is all for this week. My next post will be on Sunday February 10th. Please feel free to email me with a comment. Email all Town of Cary questions or comments to Harold.Weinbrecht@townofcary.org. Email personal comments to augustanat@mindspring.com.