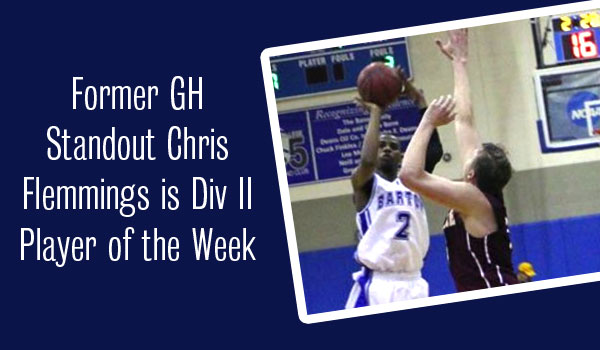 A Big Week for Chris

Freshman guard Chris Flemmings shot over 56.7% (17-30) from the field including an impressive 52.6% (10-19) from three-point distance to average 16.3 points per game in three Conference Carolinas wins this past week for No. 12 nationally ranked Barton College.

Flemmings added 3.3 rebounds, 1.7 steals and 1.0 assists per game for the week as the Bulldogs won all three contests by matching 76-68 scores. Flemmings scored 11 points and pulled down seven rebounds in Monday’s win against Pfeiffer.The 6-foot-5 guard then added 16 points including 3-of-4 precision from behind the arc in Thursday’s road win at Queens.

Flemmings capped his big week with a career-high 22 point performance in Saturday’s victory over Erskine. With the score tied 61-61 late, Flemmings drilled his fourth 3-pointer of the game to put Barton ahead for the final three minutes.

The Falcon alum is averaging 9.8 points per game in his rookie season. Way to Go Chris!