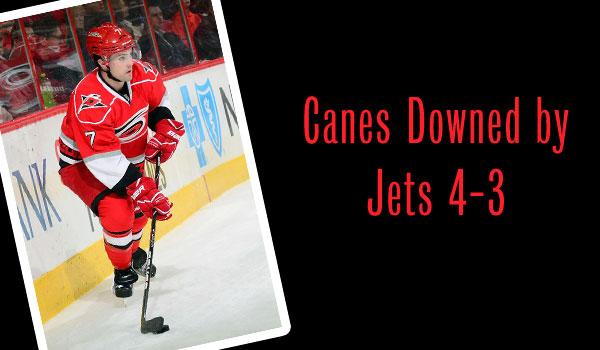 Former Cane Andrew Ladd, who was on the Canes Stanley Cup team, played in his 500th NHL game and was the games first star with a goal and 2 assists.

The Canes have been decimated by injuries.  Jeff Skinner, Joni Pitkanen, Tim Gleason, Tim Brent and Jamie McBain were all out with various injuries.

Ryan Murphy, who was the 12th overall pick in the 2011 draft, made his NHL debut.  He has had a phenomenal career in Juniors with 211 points in 220 games. Impressive, Bobby Orr-like numbers for a defenseman.   His skating ability and stick skills are amazing for a  seasoned veteran let alone a 19 year old.

Along with Murphy, the Canes had 8 others who played in the minors this season.   Coach Kirk Mueller started Murphy to take his nerves out of the game.

Very early in the game, a turnover in the Jets end wound up on Tim Wallace’s stick.  Wallace had a great chance but goalie Ondrej Pavelec made a quick pad save. Off the save, the Jets made a rush up ice, Ladd passed to Blake Wheeler who took a shot from 50’ that caught Cam Ward by surprise for an early 1-0 Jets lead.

Kevin Westgarth made a nice stop to keep the puck in the Jets zone,  made a pretty flip pass over a Jets stick to Chad LaRose.  LaRose had a clean break away, got the shot by Pavelec but hit the post.

The Jets have the worst penalty kill in the NHL so when fellow Clarkson alumni, Grant Clitsome got called for tripping, the Canes had a golden opportunity to tie the game but couldn’t capitalize.

After the penalty was over, the Jets were attacking hard in the Canes end.  Ward made 2 excellent saves within a second to keep the Canes in the game.

Very late in the period, the line of Eric Staal, Alex Semin and Juri Tlusty showed their skill. Semin knocked the puck away from a Jets defenseman along the back boards.  Staal took control along the side boards and used his strength and size to ward off the Jets defense.

Staal slipped a pass to Semin as he made a cut to the net.  A defender was all over Semin so he went wide of the net, then made a highlight backhand pass in between the legs of a Jets defenseman on front of the crease, right to the tape of Tlusty for an ‘easy’ tip in to tie the game and brought the nearly sellout crowd to its feet and back into the game.

Early in the second, the Canes had a power play that got had several good scoring chances within 20 seconds.

LaRose, carrying the puck into the Jets end all alone, did a dump and chase.  On the chase portion he was interfered by Clitsome giving the Canes a full minute of a 5 on 3 powerplay.  Frustrating that again the Canes failed on the man advantage.

The Canes clearly had the better puck possession when playing 5 on 5, but still needed to raise the level of their play.  Jay Harrison took a whack on the back of his hand that required the solid defenseman to miss a shift getting repairs.  Losing Harry could have been costly as he has been playing extremely well lately. Showing he was either back to form or for revenge, Harry took a penalty late in the period.

Joe Corvo had his stick in what looked like a good defensive position, but Jim Slater looked like he was trying out for the Olympic Diving team and drew a penalty, giving the Jets a 5 on 3.

During the penalty kill, Bobby Sanguinetti made what could have been his best play of the season when he slid on the ice blocking a shot.  It hit where there was little or no padding as he limped back to the bench and didn’t return for the rest of the period.

The third started off with penalties by both teams but, as what happens too often in third periods in the NHL, no whistles to send anyone to the box.

Deep in the Canes end, the puck looked like a greased pig as no one could control it.  The puck careened off Nik Antropov’s skate onto the stick of Evander Kane, who took a hard wrister that had eyes from the far side of the left face off circle to go high glove side on Ward to give the Jets a 2-1 lead.

The best thing the Canes could do to get the crowd back into the game was score quickly.  And score they did. Jordan Staal notched his 3rd goal of the season after Jussi Jokinen won a face off. Jokinen got the puck over to Pat Dwyer, who passed up to Harrison.  Harrison’s shot was blocked but JStaal was in great position in the high slot and quickly got the shot off that beat Pavelec off the left pad to tie the game at 2 a piece.

With 6:30 left, the Canes kept the puck in the Jets end.  Late on a shift, Semin snagged the puck at the blue line then loose a laser that almost found the five hole.  With the face off in the Canes end after the Canes iced the puck, the Jets won the face off and quickly took a shot at the goal.  Ward couldn’t corral the puck with his glove then fanned with his stick, allowing Ladd an easy open netter.

Less than a minute later with 4 players battling for the puck along the boards in the Jets end, Tlusy swept in from the blue line, picking the puck up in stride then sent a wrist shot past in to Tie the game at 3-3.

Just 16 seconds later, after getting the puck deep in the Jets end, the Jets made a text book clear to get the puck up to their forwards.  Ladd passed to Blake Wheeler who came across the Canes blue line in the middle of the ice.  Corvo lost his edge, fell down, allowing Wheeler to go in on Ward for the game winner. Frustrating game all around for the Canes.