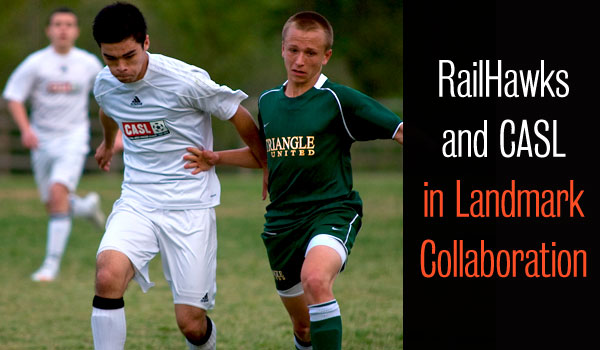 Photo by Ron B.

Cary, NC –  The Carolina RailHawks have announced a landmark collaboration with CASL’s USSF Development Academy program, which will be renamed Capital Area RailHawks starting this season.

The new relationship, which covers all of the boys’ Academy teams (U14, U16 and U18) and all of the girls’ ECNL teams (U14 through U18), has been established with the goal of making the CASL Development Academy more open to the entire eastern NC soccer community and its players, regardless of their current youth soccer club affiliation.

It will also create a more direct platform and pathway for the best young players in NC and beyond to achieve their goal of playing professional soccer.

The Academy will be renamed the Capital Area RailHawks at the start of the upcoming season in July.

Free To All Players

As part of this new collaboration, the RailHawks have agreed to a substantial three-year annual funding commitment to help make the Academy free to all of its players.  This funding will come in part from the RailHawks previously announced ticket-donation initiative, whereby the RailHawks have agreed to donate 10% of its total ticket revenue for each of the 2013-2015 seasons to soccer-related programs that will help to further build and strengthen soccer in the area.

“The Triangle community has increasingly rallied behind the RailHawks over the last two years, which has allowed us to double our attendance over this time.  This is one way of thanking the community for its tremendous support and giving back to the community in a substantial way that strengthens soccer in our area.” said RailHawks President, Curt Johnson.

“I am very excited about our new involvement in the Academy, since a number of former local youth players have signed professional contracts with the RailHawks, other teams in the NASL, as well as teams in MLS.  This new Academy collaboration creates a realistic development model for players who someday wish to compete at the professional level,” said RailHawks Head Coach, Colin Clarke

Starting with the next Academy season in July, all of the boys’ Academy teams and all of the girls’ ECNL teams will wear the official adidas uniform of the Carolina RailHawks.  Blue Cross & Blue Shield of NC will be the Academy’s new front-of-jersey sponsor and Dunn Physical Therapy will be the Academy’s new front-of-shorts sponsor.  In addition, a new organizational structure has been set up with John Bradford named as the Academy Director.

“This new program is designed for the total development of the highest level players within our geography and beyond,” said new Academy Director, John Bradford.  “The new program joins the top level youth players with proven, successful coaches at the youth, collegiate, and professional levels with the goal of establishing the best arena for players to reach their full development potential.”

How Would You Like to See Cary’s Money Spent?
Scroll to top