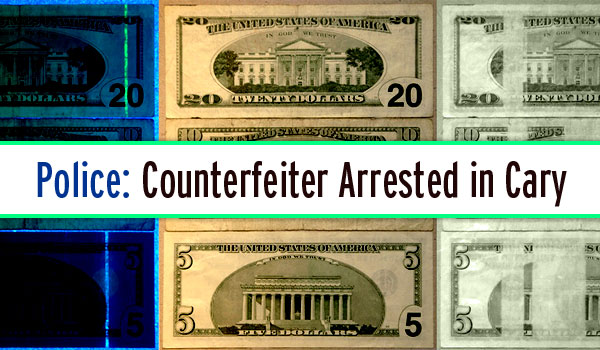 Story from Town of Cary. Photo by Steve Pomeroy.

Cary, NC – Thanks to a tip from the Town of Apex and information from the City of Denver, the Town of Cary Police Department has charged an out-of-town suspect with fraud after he attempted to use counterfeit money to rent a Cary hotel room and purchase a car in Durham late last week.

He faces up to 105 months in jail for all of the charges.

On February 26, 2013, Lewis reportedly attempted to rent a room at the La Quinta Inn, located at 191 Crescent Commons Drive in Cary, by using a counterfeit $100 bill but was turned away by the hotel clerk.

The next morning, a black backpack found by a pedestrian behind the hotel led the Cary Police Department to contact a detective with the Denver Police Department in Colorado Springs, who identified Lewis as the person who tried to rent the room and informed Cary police that he was wanted by the State of Colorado for drug charges and was believed to be in possession of a stolen car and other stolen property.

Two days later, Cary police located the stolen vehicle, a blue Volkswagen Jetta, in the parking lot of the Wal-Mart at 2010 Kildaire Farm Road. The vehicle was unoccupied.

However, shortly thereafter Cary police received a phone call from the Apex Police Department notifying them that Lewis had attempted to purchase a vehicle from an Apex resident using counterfeit $100 bills. He was taken into custody at the Red Roof Inn at 1800 Walnut Street in Cary, where multiple counterfeit bills in various denominations were uncovered.

Lewis confessed to being in possession of the stolen Volkswagen, manufacturing the counterfeit notes, and using stolen identification to rent the room at the Red Roof Inn.

“Great things happen when police agencies work together to protect the public,” said Capt. Don Hamilton of the Cary Police Department. “Because of the cooperation from both the Apex and Denver police departments, we were able to keep our citizens and businesses safer.”