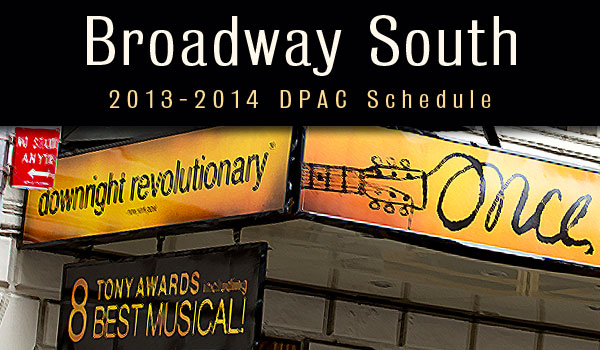 Cary, NC – The lights of Broadway are just 20 minutes from Cary. Broadway South, that is, with a new season of shows announced for Durham Performing Arts Center.

Broadway shows are a little like the circus – the cost tens of millions of dollars to produce (or more), involve hundreds of people, props, music, scripts. It’s all a very big production and it has to be scheduled long in advance.

The new Broadway South schedule for DPAC spans the Autumn of 2013 through the Spring of 2014. Season tickets are on sale now. Individual show sales start soon. More info at DPACNC.com.

From my house off SW Cary Parkway near the YMCA, I get to American Tobacco Campus in 20 minutes via the new Triangle Expressway/147. No lights, no traffic – just a straight shot up to Durham from Cary.

You can get on at US 64, Green Level West Road (which is the continuation of High House) and from Davis Drive in RTP, among other entry points. See the whole map. You don’t need a transponder or to stop for a toll – you’ll get a minuscule bill in the mail.

TriEx/147 is an especially good option during rush hour, completely avoiding I-40.