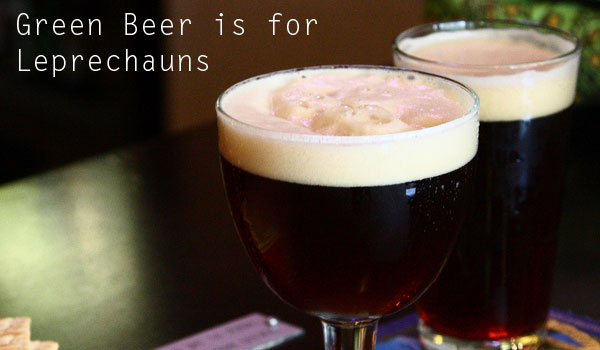 Story by April Schlanger, owner of Sip…A Wine Store. Photo by Will Vanlue.

Cary, NC- Green Beer is for leprechauns, “GREEN” beer is for humans. The word GREEN is not only a color, but it’s a movement.  It is what people who are concerned about our environment want to paint the town. There are plenty of GREEN beers to enjoy.  Whether you want Certified Organic, No Preservatives, or local, there is a Green beer for you. So, put down that colored beer and pick up a beer that makes a difference not just on St. Patrick’s Day, but all year long.

Rogue Irish Style Ale is not only a great St. Patrick’s Day beer, but it’s a delicious ale to enjoy any time of the year.  Rogue beers always use ingredients that are produced without chemicals and the beer is produced without preservatives.

This Irish Style Ale was created back in in 1998. Rogue Brewmaster John Maier wanted to create an Irish style lager that would float Guinness. It took four batches to get it just right. John used acidulated malts imported from Europe that resulted in a crisp, apple flavor profile. The bottle label displays a famous Irish Flutist. An Irish style lager with a smooth mellow flavor and an apple crisp finish. available for 22 oz at  $6.40 each

An Alternative to Guiness

North Carolina is the largest U.S. producer of sweet potatoes.  This is not Sweet Potato pie in a bottle, there are no cloying spices in this beer.  Doctor George Washington Carver was an Southern environmental scientist and farmer.  What better way to pay tribute to him, then with this beer?

Fullsteam uses 250 pounds of local sweet potatoes per batch.  Growlers of Fullsteam are $14.99

For those of you that just need a traditional Irish Beer on St. Patrick’s Day consider O’Hara’s Irish Pale. A Contemporary style I.P.A. dry hopped for extra aromas. This pale ale has a light malt base with just the right mouth feel to allow the hop character to predominate. Grapefruit like bitterness is full and lasting and is balanced by a zesty citrus burst of aroma from the late addition of cascade hops. Available by the bottle, 12 oz for $1.98.

Food on CaryCitizen is sponsored in part by Sip…A Wine Store, home of organic wines and beers and locally crafted gift items. The store also offers wine tastings and classes.

WakeMed and Wake Tech Pitch In for Read & Feed