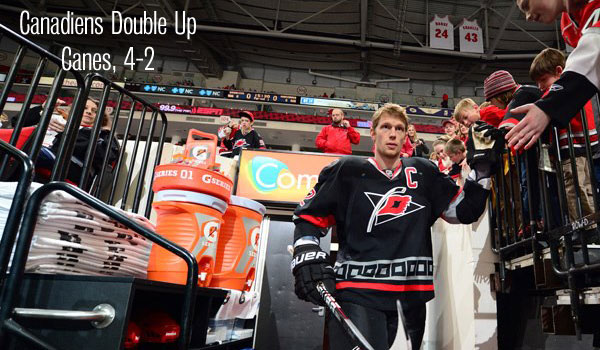 Many Caniacs were anxious to watch lonng time Cane, Erik Cole, but he was just traded from Montreal to the Dallas Stars. When Cole found out he was traded, right after telling his wife, he called another former Cane, Ray Whitney who joined the Stars over the summer after a couple of years in Phoenix.

Brett Sutter got an early call for a penalty that may have been questionable, giving the Habs and early powerplay. The Canes successfully killed the penalty with the Canadiens getting off 3 shots.

After the penalty, the Habs won the face to Justin Peters’ right. The puck came back to Alexei Emelin who did a complete 360 fooling Drayson Bowman.  Emelin took a few strides towards the net, shot into traffic Peters made the chest save but the puck bounced in front.

Brandon Prust was camped out in front, went untouched and scrambled to get the puck past Peters for an early Montreal lead, 1-0.

The teams were playing 4-on-4 with both Eric Staal and Alex Semin sending hard shots at Carey Price.  The Habs cleared the puck, passed up to Prust who carried the puck into the Canes end along the far boards covered well by Joe Corvo.

On a defensive lapse in the mid slot area, Josh Gorges was wide open to receive Prust’s pass.  Gorges got behind the defense, went in uncontested on Peters and sent one between Peters and the left post for a 2-0 Hab lead.

At 7:25, EStaal won a battle along the boards and made a hard centering pass to Justin Faulk.  Faulk had an open lane to the Canadiens’ goal.  Faulk had a great slap shot with Price making an impressive glove save.

Jordan Staal took exception to Jeff Skinner getting pushed into the boards by pulling a Canadien off Skinner’s back. The refs thought the lesson JStaal was trying to teach about sportsmanship wasn’t in the books so he drew a penalty negating a Canes powerplay that lasted only 3 seconds.

Best Period of the Season

The second period may have been the Canes best period of the season with excellent defense, solid forechecking and constant movement.

The Canes started the second with the second half of a powerplay. The first unit had its chance late on the man advantage as Skinner had the puck on the top side of the face off circle, took 2 strides towards the goal then sent a slap shot at Price. Price made the pad save then EStaal too 2 hard whacks before Price froze the puck.

The Canes were skating harder on every shift this period.  Faulk reached up to catch an attempted clear at the blue line, he quickly put the puck on the ice and made a quick pass to JStaal. Staal turned, went into the faceoff circle then sent a laser that found the back of the net as Pat Dwyer was blocking Price’s view getting the Canes within 1.

The fourth line was out doing a great job banging bodies and getting the puck out of the defensive zone.  Kevin Westgarth forechecked inside the offensive zone forcing a weak clear to the neutral zone. Jeremy Welsh took possession of the puck, passed up to Bowman who sent a hard slap shot from 70’ that beat Price to the lower right corner to tie the game at 2 a piece.

With 6:42 left, Skinner slashed in the offensive zone allowing momentum to switch back to Montreal.  During the penalty, EStaal knocked the puck loose to the neutral zone, retrieved his own clear then skated all the eay to the Habs net.  Just as Staal was about to shoot, Yannick Weber hooked Staal for a penalty shot. For the penalty shot, Staal came in hard and fast, trying to lure Price to his left.  Price held his ground and managed to get a piece of the puck to send it high over the goal.

Here’s where I think the NHL should give the teams a choice in a penalty shot situation: take the penalty shot or have a 2 minute powerplay.

Canes Back to First Period Play

The third started out with chippy play by both teams using sticks on opponents legs as much as on the puck. Brian Gionta, who was in a stick battle with Juri Tlusti on the initial face off, got caught smacking Faulk upside the head for a 2 minute minor penalty.

The Canes powerplay couldn’t get anything set up for a decent shot and may have been the turning point of the game.  If the Canes scored here, the momentum from the second period may have been carried into the third. The Canes looked like they did in the first: flat and on their heels.

With all 5 Cane skaters on the near side, Gorges passed over to Lars Eller cutting down the far side for an easy tip in to give the Habs a 3-2 lead.

The Canadiens are a fast team and are one of the smaller teams in the NHL proving size doesn’t matter as they are first in the Eastern Conference.  With Semin in the box for a very weak call of high sticking that had EStaal disagreeing with the ref.

After hard work by Lars Eller keeping the puck alive in the Canes end, PK Subban scored a rocket of a powerplay goal to seal the game at 4-2.

Here’s a 4:00 video recap of the games from Carolina Hurricanes.

Green Beer is for Leprechauns

Letters: Do We Pet Horses or Eat Them?
Scroll to top