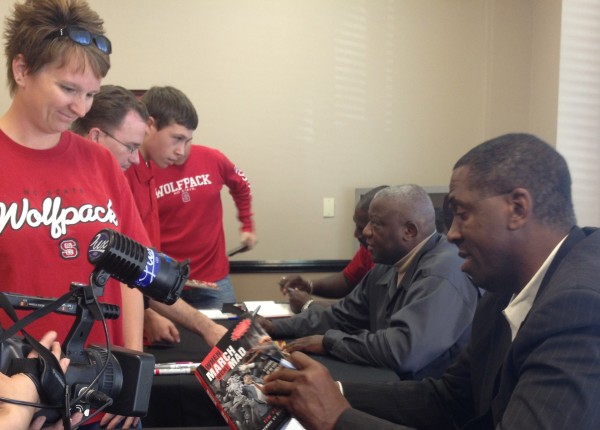 Cary, NC – March Madness is upon us, and as part of the excitement, three of NC State’s’s 1983 NCAA championship team visited Cardiac’s Sports & Memorabilia store in Cary on Sunday, March 10.

Dereck Whittenburg, Ernie Meyers and Cozell McQueen were in town to promote ESPN’s documentary “Survive and Advance”. The short documentary is part of ESPN’s second volume of “30 for 30” series: thirty films, over 30 years, 30 producers. This film will air on ESPN next Sunday, March 17 at 9pm.  The film tells the story of the 1983 NC State basketball team that went all the way to win the NCAA championship coached by legend Jimmy Valvano.

The three former basketball stars came to Cary and graciously signed autographs for Pack fans eager to share in the history of that great team. As each item was autographed, Cardiac owner Jonny Cannon made sure that they were authenticated on the spot for the fans. Jerseys, posters, books and photos all received the pens of the three stars. 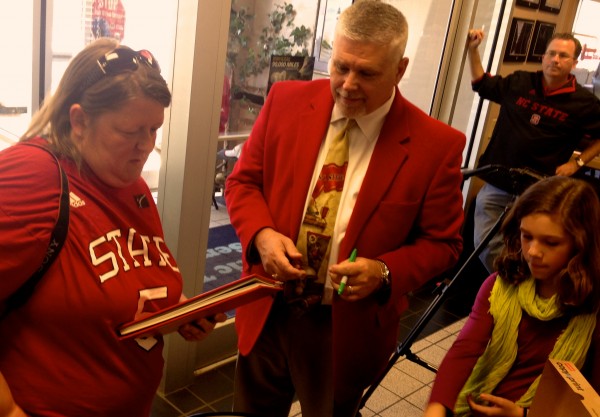 Dereck Whittenburg, who now lives in New York, told me the film was entered and shown this summer at the Sundance Film Festival, mentioning that the festival does not usually accept sports films, but that “Survive and Advance” was different. The nature of the story, with coaching legend Valvano urging his team to “Survive and Advance” and the special chemistry that team demonstrated were not just legendary for Raleigh, but tell a greater story.

The film was directed by Jonathan Hock. From ESPN: “In 1983, the late Jim Valvano led the NC State Wolfpack through a series of nine overtime and 1-point games. But one game and one play will be remembered forever”. NC State made it to the playoffs as underdogs having won 9 straight games and even beating Michael Jordan to get there. Hock describes the ultimate play that won that fateful championship and Dereck Whittenburg’s hand in the win:

His great moment —  — was hoisting up a desperate prayer of a ball that was caught and dunked by his teammate, Lorenzo Charles, giving their NC State Wolfpack the unlikeliest NCAA Championship victory imaginable. This was the moment that the NCAA Men’s Championship Tournament became March Madness, the miracle that made college basketball a highlight of the sports calendar right up there with the Super Bowl and the World Series.

Dereck became the driving force behind getting this movie made. He contacted Hock with his idea to get the film made and mark the 30th anniversary of that win. Two days after they spoke, Lorenzo Charles, a bus driver in Raleigh, died in a crash. The former players got together to mourn Charles, and suddenly the idea for the film took on new meaning.

Tune in Sunday to ESPN and relive what led up to the legend that would become March Madness. 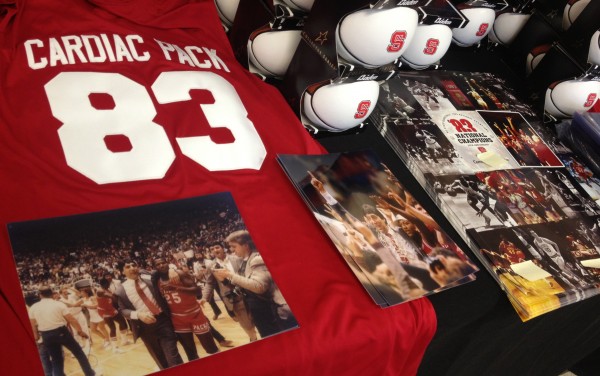