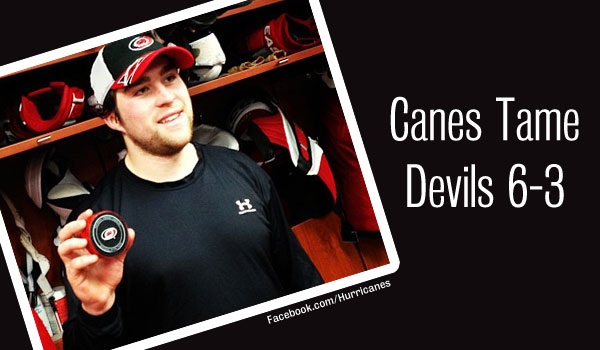 Raleigh, NC – The Carolina Hurricanes had a complete team effort in a 6-3 win over the New Jersey Devils, Saturday March 9 at the PNC Arena. It was Military Appreciation Night and the Canes came out for warm-ups in camouflage game sweaters as a classy tribute to the military in attendance in the seventh sellout of the season.

Both teams came out skating very well with short passes and solid forechecking.  For the first 8 plus minutes, neither goalie was tested until the Devils had the first scoring chance.

Canes goalie Dan Ellis, back in goal after recovering from flu like symptoms, made 3 quick saves, to leave no doubt among fans and coaches, he was feeling better.

After Ellis made a save in which he sent the puck behind the net, Jay Harrison got called for a trip that could have been called on New Jersey for dive. The defense stepped up, keeping the puck high while blocking 2 shots and allowing just 1 shot.

With former Cane Tom Kostopoulos in the box for interference, the Canes had their first powerplay unit on the ice.  The puck was low behind the net and hard work by Juri Tlusty allowed him to win the puck from 2 Devils.  Tlusty got the puck over to Joe Corvo along the half boards.  Corvo looked to the crease and saw Alex Semin along and made a quick hard pass.  Semin caught the pass and made one move then sent in a backhander that looked very easy but was all skill.

Less than a minute later, Jordan Staal stole the puck in the Canes’ end, banked the puck off the boards to himself to get around a Devil, went into the offensive zone, then took a shot that Johan Hedberg made a blocker save. The rebound was right out in front with both Jeff Skinner and Harrison charging the net.  Skinner got a stick on the puck but Hedberg made the save and another sweet rebound that Harrison put in the back of the net for a 2-0 Cane lead.

The Devils got on the board getting a short-handed goal by Ilya Kovalchuk.  Justin Faulk had the puck at the right point taking a slap shot towards the goal. Kovalchuk blocked the shot with the puck rebounding off his shin pads back past Faulk. Kovalchuk skated past Faulk, grabbed the puck, went in on Ellis and added to the Devils league leading shorthanded goal tally to cut the lead 2-1.

Early in the second, Ellis made a save then realized the Devils were making a line change.

Ellis made a 110’ pass to Semin at the Devils blue line.  Semin entered the zone with the lone defender moving over to pick up coverage leaving Tlusty open on the left side. Semin made a beautiful lead pass to Tlusty who put in his 12th goal of the season to tie with Eric Staal for the team lead in goals.

A little over midway in the period, Bobby Sanguinetti, on the left point, stopped the puck at the blue line and sent it towards the net.  EStaal was there for the pass, and then tipped it over to Chris Terry parked to Hedberg’s left.  Terry took 2 whacks at the puck sending it 5-hole for his first NHL goal in his first NHL game.  His family’s, who were in attendance, only outdid his smile on the ice.

This was the first game-first goal by a Cane since the 2002-2003 season when, if I remember correctly, they had about 5 players accomplish that feat.

Late in the period, Jussi Jokinen put the puck up to Tim Gleason.  Gleason sent the puck to the net that Hedberg had trouble handling.  With the puck loose, Skinner, in an instinctive reflex nudged the puck way to his right while he was skating left.  Hedberg was slow in reacting to the Skinner’s slyness and the puck slipped into the net for a commanding 5-1 lead.

Early in the third period had the Devils raising hell with the Canes.

The Devils did a good job of keeping the puck in the Canes end for a long time. The puck was behind the net with Kovalchuk going down low to get it.  Faulk was in a good defensive position but when Kovalchuk centered the puck to the crease, the puck careening into the net off Faulk’s skate.

A few minutes later, Marek Zidnicky had the puck at the right point and send a high pass to Patrik Elias. Elias was well guarded by JStaal but somehow managed an unbelievable redirection into the net from just about the face off dot that would have beaten any goalie. Elias is a great player who has been a Cane killer over the years.

A smart time out by Cane coach Kirk Mueller allowed the Canes to regroup and stop the Devils last gasp attack.   That time out seemed to do the trick as the Canes got control of the game again.  Former Canes Ryan Carter and Alexei Ponikarvosky both had decent games and combined for 7 shots on Ellis.

With over 2 minutes left in the game, New Jersey pulled Hedberg. Skinner almost made a 120’ shot but the puck hit the side of the net.

After the next faceoff in the Canes end, the defense cleared the puck with Tlusty snaring the puck in the neutral zone.  Tlusty went in the Devils end with Adam Larson draped all over him.  Tlusty made a strong move towards the net, protecting the puck with his body and put in the empty netter to seal the game.