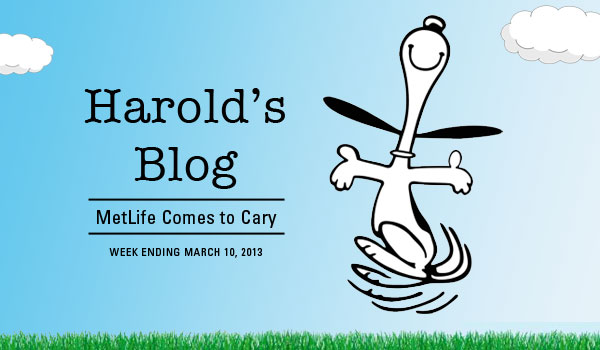 Cary, NC – This week was much slower than last week. The highlight of the week was the big announcement that MetLife is coming to Cary.

I spoke on the needs of our community which include the poor, young, and elderly. We talked at length about what we have seen in our various roles and how many people in Cary don’t understand there is great need.

Most people in Cary don’t even know we have homeless. This group of clergy is looking for a way they can combine their efforts to have the biggest impact in Cary as possible. I am excited about their ideas and look forward to their plans.

Also Monday, I was asked to say a few words at a Democratic Precinct organization meeting. My comments focused on getting involved in the school board races and the municipal races.

Tuesday my only scheduled meeting was with the town manager. Our discussion was brief and touched on a communications issue and the town’s state legislative agenda.

Wednesday morning I gave remarks to the Cary Chamber Youth Leadership Program. I basically described my role as mayor and the importance of communicating with staff, council, the chamber, and other governmental entities. My talk lasted about 15 minutes with only a few questions.

Thursday was a big day for me and the town of Cary. One of the biggest job announcements in Cary’s history was made by the governor in downtown Raleigh.

MetLife will bring 2,600 jobs to North Carolina over a three year period. Half of the jobs will be in Charlotte and the other half in Cary. Cary will be the home of the IT hub and the jobs will have an average annual salary of over $100,000.

I believe MetLife coming to Cary is a great fit given the IT professionals in the area, Cary’s educated population (3/4 have Bachelor’s degrees and ¼ have higher degrees), and our location between three major universities. It is not clear at this point how many people will be relocating to the area and how many jobs will be available locally.

The location is still being kept quiet because of ongoing negotiations. The people locating to this area should have a big economic impact on our community especially in the housing market.

I was asked earlier in the week by the Governor’s Office to be a part of the MetLife announcement and was instructed to be in downtown Raleigh a half hour before the announcement.

Once I arrived and greeted a few people I was led into a holding room where I met executives from MetLife. They were excited about their decision and locating in Cary and Charlotte. I was joined by Wake County Chairman Bryan and Speaker of the House Tillis. Others in the room included a MetLife PR person and several members of the Governor’s staff including the Chief of Staff. Once the Governor showed up we did several pictures with various combinations of people. Then it was time to head to the stage. I was told to keep my remarks to one minute.

In my remarks I welcomed MetLife as Cary’s newest corporate citizen and pledge support to help them be successful, thrive, and prosper. After everyone spoke, the Governor asked that I join him in the photo op presenting a NC flag to MetLife. Then we all left the stage and talked with the media.

The Governor’s staff invited me to join the Governor and MetLife executives at the Governor’s mansion for tea. I was extremely grateful for the offer but had to decline due to other commitments. I am sure I will regret missing this once in a lifetime opportunity.

All in all this was a fantastic announcement that I believe will have a significant positive impact in Cary. Details are still being finalized and the council still has to officially approve the incentive that it offered. But I don’t see anything stopping this great announcement from becoming a reality.

Later in the day I joined council member Bush as a substitute for the Operations Committee. Most of our recommendations had to do with bid awards and plans. We did recommend that the Dynamic Message Signs be removed and that Long Range Water Resources Plan be approved.

Following the Operations Committee meeting I joined council member Bush to discuss various items with staff. The conversation included the potential location of a communications tower, the Bradford project at Davis Drive and High House, the lot next to the Bradford, a proposal for the Herb Young property on West Chatham near Old Apex, and the Interbasin Transfer Bill that was introduced in the legislature. The Operations Committee and the subsequent meeting lasted about an hour and a half.

Emails from staff included a notice about champion trees being removed in the site redevelopment of the old Galaxy Theater. Ordinance requires that the developer widen Maynard an additional 12 feet. Of the approximately 17 trees in excess of 30 inches in diameter on the site, 7 are indicated for removal though only four of those are actually in excess of 30 inches.

Staff also reminded us that this upcoming week is Sunshine Week. Sunshine Week is a national initiative about the importance of open government and freedom of information. Sunshine Week is a good public relations opportunity to empower citizens to play an active role in their government, which can make their lives better and our community stronger. The Town of Cary believes an open and accessible government is vital to establishing and maintaining the people’s trust and confidence in their government and in the government’s ability to effectively serve its citizens.

Emails from citizens this week included questions about produce food trucks, criticism of our clear cutting ordinances, opposition to a proposal to add office on a property off Kildaire, a request to expedite Morrisville Parkway, a complaint about fencing around construction at the old Galaxy Theater, a request to stop building in Cary, a complaint about the left turn off Tryon onto Piney Plains, and several requests for meetings.

This week has events every day for me. It will include an Arbor Day celebration, a School of Government kickoff, a meeting with a homeowners association, and a council meeting.

Well that is all for this week. My next post will be on Sunday March 17th. Please feel free to email me with a comment. Email all Town of Cary questions or comments to Harold.Weinbrecht@townofcary.org. Email personal comments to augustanat@mindspring.com.