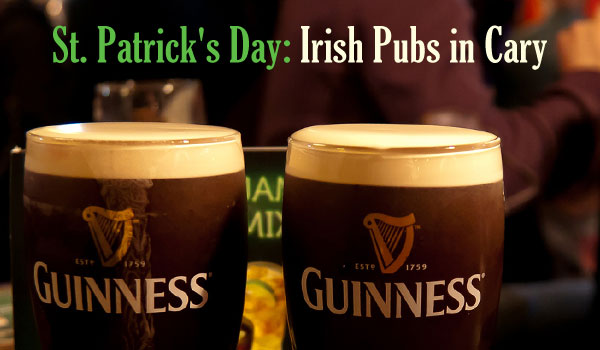 Cary, NC – When you come from New York City, you think that St. Patrick’s Day is a crazy celebration with public drunkenness and a parade through town that leaves the average worker vowing to stay inside for lunch on March 17. But here in Cary, the revelry is decidedly more civilized. Look for these local pubs to fix you up with some excellent grub, fine Irish entertainment and a pint or two.

There are lots of fine pubs, taverns and brew houses in Cary. But these three have a specifically Irish flavor and will be celebrating the Green this weekend.

All weekend the restaurant will be celebrating St Patrick’s Day. On Saturday, they’ll have their first parking lot party of the year with live music and Irish drink and food specials. On Sunday, they will have traditional Irish music and much more.

Opened about a year ago at the corner of SW Cary Parkway and Tryon Rd in a location that has been several other restaurants in the past. The pub will have plenty going on all weekend long including authentic bagpipe playing by The Chucktown Piper  during the day and live entertainment from Eire Lingus and Shanachie  beginning  at 7:00 PM on Saturday evening and at 6:00 PM on Sunday. Plenty of Irish specialties on the menu, as well as American favorites.

Located in the former Connelly’s spot in Cornerstone and run by many of the same folks the pub has been open for several months. With Irish pub ownership in his blood, Michael Doherty opened Tir Na Nog, then Connelly’s and now Doherty’s. The St Paddys Outdoor Party Weekend gets started this Friday, March 15 and continues all weekend with plenty of fine entertainment. Live music starts at 10pm Friday with Peter O’ Dea.  Saturday the party starts up in the parking lot at 3pm with Finally Friday and Three Beer Sally. DJ George plays the after party inside at 10pm. Sunday gets rolling at 2pm with Kevin Kendall, Dublin Down and Barleycorn & Rye, finishing with Rockzilla at 8pm. The event is free (pay for drinks and food) and includes bagpipes and Irish dancing.

And in case you didn’t know- St. Patricks’ day is always March 17. Why do the Irish get so crazy about this day? It is a decidedly American Holiday, for the Irish to celebrate their roots. Their patron Saint (Patrick) reportedly drove all the snakes out of Ireland into the sea. He was a Catholic Bishop orginally from Wales or Scotland who lived in the later 5th century AD. His life’s work was spreading his faith and Christainity and converted many to Catholicism.

The shamrock was used as a symbol of the holy Trinity in his teachings, and later adopted as a symbol for the Irish. St Patrick’s Day is celebrated on the anniversary of his death.

So wear the green and celebrate with the Irish this weekend. Sláinte!