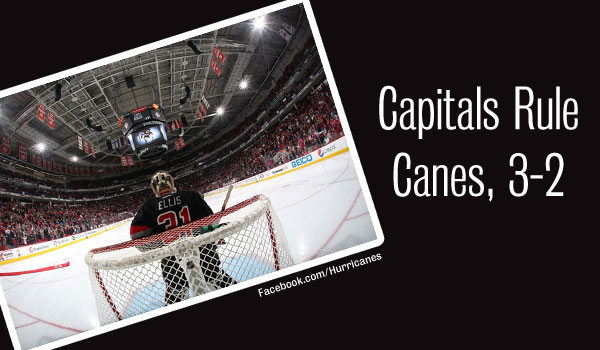 Raleigh, NC – The Washington Capitals came back from an early 2-goal deficit and beat the Carolina Hurricanes, 3-2 at the PNC Arena, Thursday March 14.

The Caps have to play every game as if their season is on the line as it is.  They started the game 10 points behind the division leading Canes and going down 12 points with 22 games left would be almost impossible.  The Canes blanked the Caps 4-0 in the first of this home & home series on Tuesday in Washington.

The first line of the Canes opened the scoring early on an excellent looking play. Alex Semin tried a weak wraparound only to lose the puck at the base of the goal, with his momentum having him fall in the crease area. Juri Tlusty pick up the puck behind the net, passed over to Eric Staal in the far corner.  Staal settled the puck, looked up and saw Semin all alone in front of the goal on a ‘what we’re they NOT thinking’ move by the Caps defense.  Staal made a hard, sharp pass to Semin who made it look too easy as he had time to select where he wanted to put the puck in the net.  He chose the right side of Michal Neuvirth to put the Canes up 1-0.

Shortly after the faceoff after the goal, the Caps had a 2 on 1 with Jamie McBain quickly trying to get back on defense. Bobby Sanguinetti split the distance between the 2 Cap forwards then dove on the ice, stretching his stick to hit the puck to the sideboards making an impressive play.

Midway in the period, Tim Gleason passed over to Joe Corvo at the left point.  Corvo saw heavy traffic in front of the Caps’ goal so he dumped it to the high slot to Pat Dwyer.  Dwyer had his stick angled just right to deflect the puck to the net.  Dwyer had an early St. Patrick’s Day present as the puck had Irish eyes and found the back of the net for a 2-0 Cane lead.

The Caps’ best scoring chance of the period came with their second line taking 3 quick shots, all from close range.  Dan Ellis made save after save allowing the defense to clear the puck.

Alex Ovechkin was taking double shifts as the Caps needed anything to generate consistent offense.  In Tuesday’s game against the Canes, Ovechkin did not have any shots on goal for the second time this season.  Both times were against the Canes.  It’s not that he’s double teamed, Coach Kirk Muller just want the team to be aware key players are on the ice at all times and cover appropriately.

EStaal got called for a trip late in the period but the Canes defense played well and did not allow a shot for the Caps’ powerplay unit.

The Caps started the second skating harder, faster, checking well and taking bodies off the puck. It took a few shifts for the Canes to get back to match the Caps play.

The line of Jordan Staal, Jeff Skinner and Jussi Jokinen set the bar higher for all Canes lines as they were clicking on everything except putting the puck in the net.  At this point neither team was taking many shots as forechecking was tight and most of the play was in the neutral zone.

The Caps scored on a play that was pure hustle. Aaron Volpatti was along the left midboards with Justin Faulk in a good defensive position.  Rookie Joey Crabb drove from the right wing to the crease area with a stride on Tim Wallace.  Volpatti saw Crabb and sent a nice lead pass to his stick for a pretty tip in cutting the lead 2-1.

As the period ended, EStaal got called for a high stick giving the Caps a full 2 minute man advantage on new ice in the third.

Special Teams are the Difference

The Caps have the third best powerplay in the NHL and they showed why. A minute into the period, Nicholas Backstrom had puck deep in the Canes end and made a centering pass. Ellis sticked the pass out but went right onto Troy Brouwer’s stick.  Brouwer saw Ovechkin alone in the right faceoff circle, made a quick pass and Ovechkin sent home the tying goal.   Sanguinetti got slammed into the boards on a vicious shove by Crabb in which Sanguinetti was slow to get up.

Question is can the Canes talented powerplay unit finally break the hex of not scoring and live up to their potential.  Unfortunately the answer was no and may have been the turning point of the game. The Canes did get off several good shots but Neuvirth made all the saves.  The powerplay was cut short as Faulk got called for a hold.

A little howdy-do behind the play between Semin and Eric Fehr, probably not exchanging email addresses, drew roughing penalties for both players.

The teams were playing 5 on 4 with EStaal tied up along the half boards.  Without a teammate to pass to, Staal made a desperation dump towards the net and wound up hitting the post which would have made the top 10 goals of the week if it went in.

Jay Harrison’s shut down type defense was especially good in the third.  His long reach and solid play of taking the body did not go unnoticed by the coaches and Caniacs.

With 2:16 left, Ovechkin got a pass behind the Canes defense and went in on Ellis.  Just as he got to the goal he slid the puck behind Ellis right on the goal line. Immediately there was a mass of bodies, sticks and Ellis’ backside around the puck.  The ref called it a goal and it took a replay to confirm the goal did cross the line for less and ½ a second giving the Caps the 3-2 lead.

With Ellis on the bench for a 6th skater, JStaal was pulled down with 14.4 seconds left but the Canes couldn’t put one in giving the Caps a comeback 3-2 win.

Lyle Lovett Headlines Band Together May 4
Scroll to top