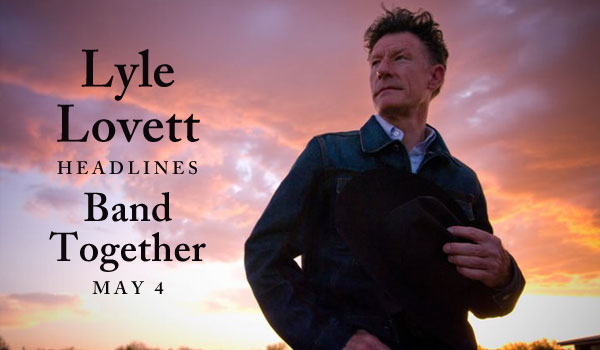 Cary, NC – The concert season is starting to gear up. Koka Booth Amphitheatre just announced that Lyle Lovette will be performing a Band Together Benefit Concert on Saturday May 4.

Band Together NC, a Triangle-based organization that uses live music as a platform for social change, has announced that American country singer-songwriter Lyle Lovett will headline this year’s charity concert on May 4 at Cary’s Booth Amphitheatre, benefitting Tammy Lynn Center for Developmental Disabilities.

A singer, composer and actor, Lyle Lovett has broadened the definition of American music in a career that spans 14 albums.  Coupled with his gift for storytelling, the Texas-based musician fuses elements of country, swing, jazz, folk, gospel and blues in a convention-defying manner that breaks down barriers.  Lovett has appeared in 13 feature films, and on stage and television. Among his many accolades, besides the four Grammy Awards, he was given the Americana Music Association’s inaugural Trailblazer Award, and was recently named the Texas State Musician.

Lovett’s latest album, Release Me, mixes a smart collection of originals and songs written by some of his favorite songwriters that show not only the breadth of this Texas legend’s deep talents, but also the diversity of his influences, making him one of the most infectious and fascinating musicians in popular music.

More Acts to Be Announced

In 2011, Band Together NC’s Board of Directors announced the nonprofit recipient for 2013 would be Tammy Lynn Center for Developmental Disabilities (TLC), a nonprofit organization offering educational, residential and family support services to children and adults with special needs. Proceeds raised at the 2013 event will go to expanding the services offered at TLC, allowing the organization to make a difference for the nearly 400 families it serves. For the May 4 concert, Band Together hopes to raise more than $850,000 for the Band Together partnership with Tammy Lynn Center for Developmental Disabilities.

Lyle Lovett and Band Together
opening act: Mac and Juice Quartet, additional bands to be announced
Sat May 4, gates open at 5pm

Tickets for the event range from $34.50 (in advance) for general seating to premium reserve seating for $69.50.

VIP tickets are $150 and include exclusive access to catered food and beverage, premier viewing of the main stage, and a silent auction. Tickets will be on sale starting at 10:00 a.m. on Friday, March 15 through etix.com.