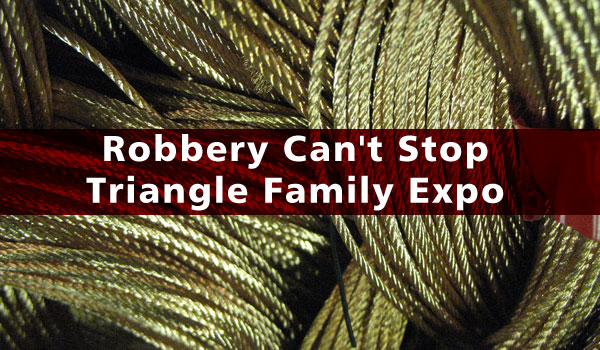 Cary, NC – A robbery at the Beaver Creek Shopping center created some quick changes in plans for the Triangle Family Expo . The Expo is part of the  Twice as Nice Consignment sale which was to start this past Monday. But when the owners did their site walk through Thursday, it was discovered that all the copper wiring had been stolen and the building was without power.

The Expo is a new addition to the  bi-annual consignment sale known as Twice As Nice. The sale dates originally were to begin Monday March 18 in the space formerly occupied by Borders Books at the shopping center just off Rt 64 in Apex.

When the robbery was discovered on Thursday, Twice as Nice owners Karen Dorman and Michelle Zimmerman were devastated. Friday was their set up day and time was tight.

The property manager told them he would get everything fixed and began getting estimates for the repairs. On Friday repairmen began estimates, but when these came in too high, the property manager, Diversified Development (DDR), told  them that he would refund their rent deposit but they would have to cancel.

The Search for Another Location

Sisters Karen Dorman and Michelle Zimmerman have run the sale for several years. Their idea this year was to expand the sale into a community event that would span the week, with 2 days of an exhibitor Expo starting this Friday. They were not going to take that “NO” for an answer.

They immediately began calling around to find an alternative location. Luckily for the business, none of the consigned items had yet been dropped off, so they did not have to deal with relocating thousands of toys and clothing items. But they had planned for a large family-friendly Expo that had more than 60 exhibitors scheduled to take part.

Monday, the team, which included marketing director Shaughnessy Dusling, visited several other locations, but most were too small for what they had planned. I spoke with Shaughnessy who said “it’s  a miracle” but they are holding the expo.

Call Out of The Blue

A call out of the blue, literally answered their prayers. The pastor from Apex Baptist Church called Monday night to ask if they would like to relocate the expo to his church. Oddly enough, the church was planned as an exhibitor at the Expo, and one sister is  member, but they had not thought to contact the church, knowing what a busy building it is. Some angel must have advocated on their behalf.

No Consignment Sale This Year

Luckily, Twice as Nice had not already taken in consigned items, but consignors had already prepared their items for the drop off that would have taken place last Friday.

As of today, Shaunessy said they have reached out to other consignment sales taking place in the area this spring, and many will honor consigned items that are already tagged for Twice as Nice.

Planned activities include hourly story-times throughout the weekend, a free Stroller Strides class, and Disney Princess appearances. Families, especially those new to our area, can find out information about services for children, all while the kids are entertained. Then have a snack at the Cafe, or enjoy some Orange Leaf frozen yogurt, or a pretzel. There will be some free tastings too!