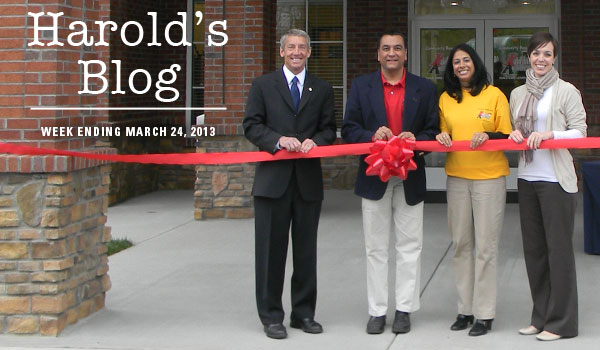 Cary, NC – This week was busier than expected with more meetings than I thought and several long nights.

Monday afternoon I met with the property owner that owns the land at Piney Plains Road and Dillard Drive. He is having problems developing his property that is mostly zoned for Office and Institutional. We discussed his idea of a retirement community at this location.

Monday night the Mayors Association met at Campbell University Law School in downtown Raleigh. We discussed recent and future legislative actions with Paul Meyer, Director of Governmental Affairs for the NC League of Municipalities. Our meeting lasted about two hours. Nine mayors were in attendance.

Attorney’s and town planning staff went over tools available to the council as we work on a permanent development process without the Adequate Public Facilities Ordinance for Roads which was repealed last month. The town has authority given from the Town Charter and General Statutes that includes street and sidewalk improvement assessments, road project regulatory or development fee, subdivision requiring construction of community facilities, zoning, regulatory codes, special assessments, taxing, establishing control of streets, traffic, and parking, and building inspections.

Council asked staff to proceed creating more detail with a goal of promoting and preserving a high quality transportation system that provides an appropriate level of service to assure public safety and the general welfare of all town citizens and the traveling public.

The second work session Tuesday was a presentation and discussion of the downtown charrette.

The proposal from the charrette showed the opportunity site with a three acre park surrounded by development. This proposal was presented to the public over the last few months and received much criticism. Feedback from citizens was mostly to make the entire site a park. Interestingly there was also the opposite feedback asking for more development on the site.

It is important to know that council has the authority to condemn a site for a park. So if council wanted to make the entire site a park they could have saved millions by just condemning the properties. I am not sure that would have been popular but it was an option.

Instead the town negotiated with owners to get them to sell with the intention of receiving some return by having some development. The amount of development was a big discussion point at this work session. Council directed staff to come back with options for a 6 to 8 acre park with much less development.

The majority of council leaned toward a larger park, 8 out of the remaining 11 acres, with some development along Walker Street. Most of the council wanted a clear view of the park from Academy Street, Kildaire Farm Road, and Walnut Street.

Staff will bring new recommendations back to council in a work session to be held in late spring or early summer.

The policy modification with the Turnpike Authority is important to Cary because it may impact if the Cary interchange at Morrisville Parkway and I-540 will be funded. I asked the committee to allow comments from Cary town staff which were presented. Hopefully, those comments and concerns will be addressed in the final policy.

Later Wednesday I attended a meeting of Economic Development Committee. Information highlights include:

The committee also received a report from council member Smith about his trip to Ireland to help our sister city in their quest to create a strong Chamber of Commerce and a mini research park. A Technology update was also given and included:

The meeting ended after about an hour.

Thursday I was scheduled to have several meetings including private meetings. My first meeting was with the pastor of Colonial Baptist Church. Unfortunately he was battling a case of food poisoning. Yuck. I had that once and it took several days to recover. My thoughts and prayers are with him. Since that meeting was cancelled I joined a meeting in progress between two council members and a developer. They had finished discussing business so I really was there to chat with everyone.

My next meeting on Thursday was with school board members Susan Evans and Bill Fletcher. They wanted to make sure I was aware of their budget requests, the legislation to change school funding, and the legislation to change how the school board is elected. They are looking for ways to communicate their message to the public. I let them know that anyone can speak at the Public Speaks Out portion of our council meetings. They said they planned to speak at a future council meeting.

The remainder of Thursday’s meetings was private.

Saturday I had the privilege of being a part of the Ribbon Cutting for the new Kiddie Academy in Cary near Tryon Road and Walnut Street. This new day care is very well equipped and should be rated as a five star day care once the required six months of business has been achieved. I wish them much success.

In emails from staff this week it was announced that the westbound lanes on Cary Parkway will remain closed because of the culvert fire. Traffic will be detoured to Tryon Road then Lake Pine Drive.  They hope to have a contractor by March 29th.  Once the repair work starts, it is anticipated that BOTH directions of Cary Parkway will have to be closed for the duration of the repair for safety reasons.

Emails from citizens included several comments about the 13 acres the town purchased for the opportunity site, a complaint about House Bill 150, complaints about Cary’s process for the Cary Summit of the Future, and several invitations to events.

Next week includes a regularly scheduled council meeting and a taping of Cary Matters.

Well that is all for this week. My next post will be on Sunday March 31st. Please feel free to email me with a comment. Email all Town of Cary questions or comments to Harold.Weinbrecht@townofcary.org. Email personal comments to augustanat@mindspring.com.