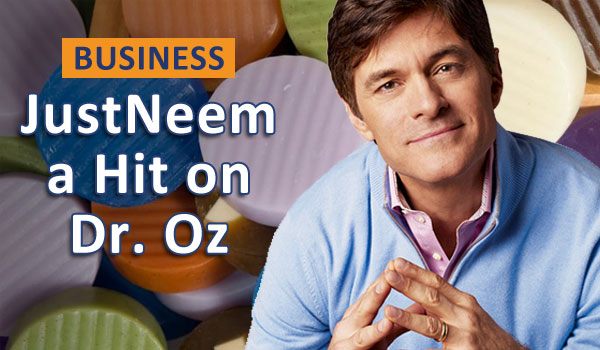 Cary, NC- JustNeem, Inc., a company based in Downtown Cary has just announced that they will be moving to a larger location after a large bump in sales following a product appearance on the popular Dr. Oz television show.

Neem is known for its healing properties, and JustNeem uses the oil from the Neem tree to make their all natural beauty products. Two of the company’s products were featured on the Dr. Oz show on February 22.

Dr. Kulreet Chaudhary of Wellspring Health brought her favorite JustNeem products along with her to the Dr. Oz Show. She is a regular contributor to The Dr. Oz Show and an expert in ayurvedic medicine.

“Within minutes of the show airing, our web sales went through the roof,” says JustNeem Marketing Manager Leslie Huffman. “We not only saw a tremendous rise in our web traffic, but more importantly we noticed a national discussion of Neem’s benefits for skin care begin to trend on social media.”

For a month after the show aired, the 8 employees at JustNeem have been making products and shipping at a pace never before seen in the company. It is estimated that the business that was done online over a few short weeks more than equaled an entire year of previous online sales.

Growing a Business in Cary

The move out of the old space is needed to make way for new production equipment and storing products after they are made and packaged. Staying in the downtown Cary area, JustNeem will be moving to a facility triple the size of their present location on Dry Avenue.

COO Magda Radtke adds, “We’ve now had to significantly increase the production for all our products, but in particular for the Neem Face Mask and Neem Tub Tea that both appeared on the show. We are thrilled with the national exposure JustNeem has received through the show which also gave a major boost to our economic development project in West Africa where we source our Neem raw material.”

A Mission in Mauritania

The company makes natural beauty products from the oil of the Neem tree grown in Mauritania, West Africa. The founders of the company, Magda and Peter Radtke,  give back 10% of the company’s profits to their work in the fields of Africa. Their company works to help the people in Mauritania learn sustainable jobs skills, including caring for and planting Neem trees, but also soap making, and growing other foods that can be sold at their local markets.

The relocation of the business to a larger facility will enable the company to manage the increasing demand for Neem products. As of April 20, JustNeem will be relocated to 203 N. Harrison Road, Suite 130, Cary, North Carolina.

Read More about the mission of JustNeem to help the people of Mauritania.