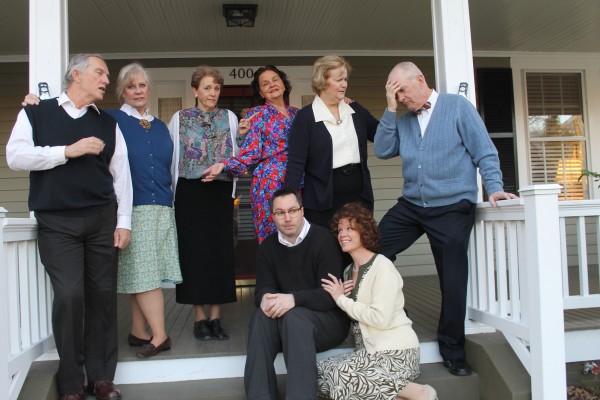 Cary, NC- Cary is neighborly town, with families moving here that appreciate our “small town charm” even though we have grown to over 140,000 residents. The Cary Players last production of the season, Paul Osborn’s Mornings At Seven, is a comedy about small town life and opens April 5th at the Cary Arts Center.

Two houses whose backyards adjoin set the scene for this charming portrait of small-town America of yesteryear. At the play’s center are the long-standing sibling rivalries of four aging sisters. Three of them–Ida, Cora and Arry (Terry Townsend, Kate Tonner and Wanda Harris)–have lived next door to each other for fifty years, and Esther (Gilly Conklin), the eldest lives only a few blocks away.

We quickly learn living so close to one another has taken a toll. The mostly quiet life these women share with their husbands (Phil Lewis, George Lynch and Bruce Ackerman) becomes unhinged when they begin to question what to do with their remaining years and then there’s that “family secret” that comes to the surface. Tensions mount further when Ida’s 40-year-old son, Homer (Jon Karnofsky) and his long-time fiancée (Mary Beth Hollmann), want to claim a house that was promised Homer, despite the fact Cora has her hopes set on it. Thus begins the series of crises, domestic and existential, that keep Morning’s at Seven percolating.

What makes this gently colored, sharply etched family portrait so engaging is its understanding that laughter and tears, as responses to everyday life, are so very closely connected.  ”You can be alone in a lot of different ways,” someone says in Morning’s at Seven. The play counts the ways, but in a spirit of such benevolent acceptance that it comforts even as it breaks your heart.

It all adds up to a story of humorously dysfunctional family life, with an emotional underpinning which anchors the play in reality. There is hope for a return to a calmer time when, as the poet Robert Browning wrote: “The year’s at spring and day’s at the morn. Morning’s at seven, the snail’s on the thorn. God’s in his heaven, all’s right with the world.”

Director Tim Wiest is guiding the ensemble cast.  Mr. Wiest has performed in this play three times, twice with other Triangle theatre companies, and he welcomes the opportunity to share his vision for this show with Cary theater-goers.  “When I was asked to direct Morning’s and revisited the script,” says Wiest, “I was reminded immediately how much I love all these characters – their quirks, their foibles, their longings, their strengths. These are people you can draw to your heart.”

Brad Sizemore is designing the set which features two backyards and porches reflective of small-town life in the 1930s. With the help of veteran scenic artists Jon Dietz and Scott Peters the set includes an 18 foot tall tree! Master Carpenter, Todd Houseknecth will make all the puzzle pieces fit together.  Michael Lefler is the lighting designer. Danielle Preston, a recent Meredith Graduate is the costumer. Kris Kille has designed the props and Bob Kulow is the sound designer.

The performance on Sunday April 7th will be Audio described by Arts Access for visually challenged patrons. Following the opening night performance, Cary Players will be serving a Cake from Sugar Buzz!