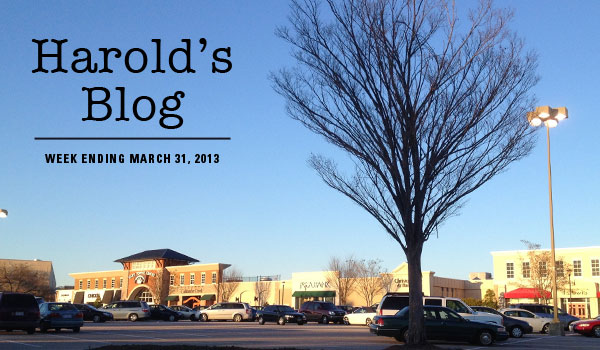 Cary, NC – This last week was typical for a week that has a regularly scheduled council meeting.

The biggest item of interest was the proposed rezoning on Cary Towne Boulevard across from the mall. The proposed development would eventually have 200 single family homes and 200 townhomes very similar to the Inside Wade development.

The dilemma the council members have is whether to approve a very nice product on one of the last large parcels near a key gateway intersection OR wait for a proposal similar to the North Hills type development.

After talking with council members I met with staff later in the day to go over the agenda. We spent time going over agenda to make sure I could answer questions and bring up issues about each item. Based on the information I predicted the council meeting would last until about 9:30 or 10:00.

Tuesday I met briefly with the town manager. He wanted to let me know that the staff was finalizing their budget and would be presenting their recommendations to council in about two weeks. We also talked about the downtown opportunity site.

Wednesday I taped the April episode of Cary Matters with Mayor Pro-Tem Adcock. The major topic was detailed information about the Summit on the Future. Our taping was done in less than half an hour.

Later Wednesday the Mayor Pro-Tem and I discussed various issues including the Bradford project and the Cary Towne Boulevard project.

Thursday started with a short staff meeting to hear preliminary ideas about the budget. Based on the information being gathered it appears that this budget season might be tougher than ones in the past few years. The council will have tough decisions to make.

Thursday night’s council meeting took much longer than I expected. The Public Hearing on the Cary Towne Boulevard rezoning had several speakers in favor of the rezoning and generated much discussion from council members. As mentioned earlier, the dilemma was whether or not to accept this very nice proposal or hold out in hopes of something grander like a North Hills development. Staff and some council members have stated to me that there has been other interest in this location. After a lengthy discussion the council decided to table the item for one month.

The next Public Hearing was for an annexation and rezoning in Chatham County. There were several speakers from Chatham County that believed the proposed 8000 square foot lots so close to Jordan Lake (our drinking source) was too small. I tend to agree. This proposal is at the beginning of the process and will next be sent by the Planning and Zoning Board for their recommendation. It will be interesting to see if this project changes as it goes through the process.

One Public Hearing was for the approval MetLife incentives announced a few weeks ago. This was unanimously approved by council (rare for an incentive proposal). The MetLife incentives will be paid annually once we receive their taxes and verify that the jobs they promised were actually created. The amount the town pays will be less than what is received via taxes from MetLife. This incentive agreement will start in fiscal year 2016 and continue until fiscal year 2023. Once MetLife is fully operational they will be one of the largest employers in Cary.

Another item that generated a lot of discussion on council was the rezoning for apartments at the intersection of Old Apex Road and Chatham Street. This location is adjacent to the Phillips Swift Creek apartments. The rezoning was approved 5 to 2 and replaced a rezoning that was all commercial with apartments and very little commercial.

After all the items on the agenda the council went into closed session to discuss three issues. Afterwards we reconvened and adjourned the meeting around 10:45.

Emails from staff this week included an update on the water quality of Jordan Lake which is experiencing algae blooms. The algae are harmless, but oftentimes can create unpleasant taste and odor to the water if not removed by the treatment process.  The Cary/Apex Water Treatment Plant does have the ability to remove these compounds with our advanced multiple barrier treatment approach. Staff wanted to assure everyone that Cary’s water system is producing high quality and safe drinking water and is aggressively treating to remove any taste and odor caused by the algae. The algae condition is temporary and should subside very soon. Our town staff has extensive experience in treating water to remove taste and odor, and Cary’s utility customers should not see any changes in their water.

In another email staff responded to questions about our water fluoridation. Fluoridation of drinking water supplies is strongly encouraged by state and federal regulatory agencies and public health organizations.  As a public water supplier, the Town of Cary relies on this type of guidance and professional technical support provided by organizations including the American Water Works Association (AWWA) to help us properly apply water treatment technologies.  AWWA maintains regular contact with organizations such as the American Medical Association (AMA), the World Health Organization (WHO), the Centers for Disease Control (CDC), and the American Dental Association (ADA) on drinking water treatment practices.  At this time all of these public health organizations continue to support drinking water fluoridation and promote its public health benefits. The goal of fluoride treatment is to add the optimal amount of fluoride needed to help prevent tooth decay and promote good dental hygiene.  In January 2011, the Environmental Protection Agency (EPA) and the U.S. Department of Health and Human Services (HHS) announced a proposed recommended optimal level of 0.7 mg/L for fluoride in drinking water to replace the previous federal recommended range of 0.7 to 1.2 mg/L.  The State of North Carolina also issued a statement supporting the new recommended level. In February 2011, the Public Water Supply Section of the NC Division of Water Resources permitted the Town of Cary to adjust its treatment process to achieve a fluoride level of 0.7 mg/L in its treated water. The Town of Cary’s water is fluoridated in strict accordance with State and Federal regulatory requirements and guidelines. Fluoride levels in the treated water are measured daily and the levels are reported to the State’s Public Water Supply Section weekly.  The Town of Cary will continue monitoring important public health effects research which affects drinking water treatment and will consider such information while following the guidance of our regulatory authorities and the AWWA in making decisions regarding the treatment of our community’s water supply.

Staff also provided information for the repair of Cary Parkway. The N.C. Department of Transportation has awarded a $482,120 emergency repair contract to replace a fire-damaged culvert under Cary Parkway that has had the westbound lanes between Two Creeks Road and Lake Pine Drive closed since last Thursday. The fire caused the 12-by-8-foot culvert to partially collapse. Removing the damaged portion of the pipe will require its excavation across the westbound lanes and the median. Once the damaged pipe is removed and the new pipe installed, the pavement and median will be restored. Lane Construction has begun work on the already closed westbound lanes, mobilizing its equipment and starting with erosion control and pavement cutting. Excavation of the pipe will start Monday, requiring the eastbound lanes to be closed as well. Access to the residential communities along the road will remain open during construction. Cary Parkway is expected to re-open by April 15.  Work is scheduled to take place from 7 a.m. to 7 p.m., although it could switch to 24 hours a day, if needed to finish the work on time.

Emails from citizens included several about a downtown park. Apparently, there is a LOT of misinformation about the downtown opportunity site and proposed park. Here is an excerpt from one of my responses to those emails:

Thank you for contacting the town council about a downtown park.

The site where a downtown park will be located has been in plans for years. There was never an approved plan for the entire site to be a park. Currently, there is a boutique hotel approved and two historic structures that will be on the site. That leaves 11 out of the 13 acres. For years town plans have shown a park in addition to other structures on that site. Council, at its latest work session, wanted staff to come back with options for a park of 6 to 8 acres. It is my opinion that council favors some shops and restaurants along Walker but nothing else on Academy or Walnut. We will see.

Regarding the “plan”, there is not one approved plan but there have been several approved plans over the years. That is what we are doing now, finalizing a plan to move forward.

Here is an email from council member Robinson which has a lot of good correct information:

Thank you for writing about the downtown park.  I love parks, too, and want to see our network of parks expand.  Unfortunately, this parcel was never intended to be a stand-alone park.  To do that at this juncture would be a departure from what we have planned and funded.  We have been working on this parcel since 2002.  Since the beginning of our discussions, we intended to have this block host other uses in addition to a park.  Originally, we were only acquiring about 2/3 of the block with the land along Walker and Walnut remaining in private hands.  Our intent was to use the site for a park, an arts center, and some public buildings such as a library.  At some point, we also talked about having the Chamber relocated to sit on Academy in conjunction with the library and arts center.  After some time, we were approached by one of the land owners on Walker who offered to sell his land to the Town.  We evaluated the expenditure and thought that it was worthwhile because we would then have a say in the type of development that abutted our park and public facilities.  That set a new course for the Council as we decided to master plan the block in order to spur development.  We pursued purchasing the entire block as an “opportunity site” which was intended to be a mix of uses (commercial, office, residential, and public amenities, and parkland).  Some of the conceptual plans presented to us also included a parking deck.

Now we are at the point of developing the site in order to achieve the economic development for which we invested $11.2 million.  While the Council members are huge park advocates, it is safe to say that we would not have spent $871,000 per acre on the parcel with the intent to have a large urban green space.  Compare the expenditure for this parcel to that of other land acquisitions in recent years:

I hope this email helps explain why the Council is pursuing the course of action that was established several years ago.  I believe that the synergy created between the restaurants, hotel, retail, public amenities, and an urban park on that site will make our investment worthwhile.  And, that mix of uses will ensure that the park is lively, energized, and well used throughout the day and night.

I think it is important for everyone to understand that council members also want a large park but at the same time are trying to revitalize downtown. So we have a tough job of balancing those two interests.

This week’s big event for me will be speaking at the Leadership Cary Government Session. They have me scheduled to speak for an hour. Wow! I could give the state of town twice in that amount of time. We’ll see how it turns out.

Well that is all for this week. My next post will be on Sunday April 7th. Please feel free to email me with a comment. Email all Town of Cary questions or comments to Harold.Weinbrecht@townofcary.org. Email personal comments to augustanat@mindspring.com.