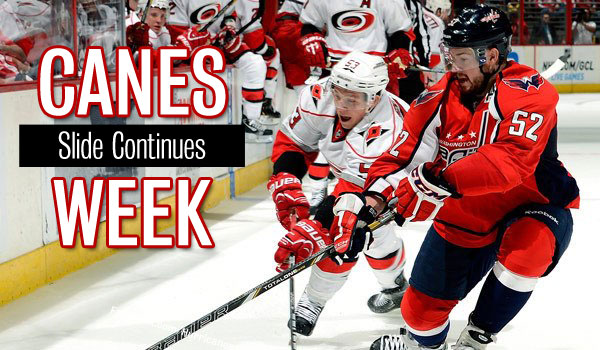 Raleigh, NC – Maybe it’s more like jump from an airplane without a parachute as the Canes lost all 4 games this week and are now just 2 points away from getting the #1 draft pick next year.

The Canes lost to the New York Rangers at home, 4-1, away to the Boston Bruins, 6-2, home against the Pittsburg Penguins, 5-3, and away against the surging Washington Capitals, 3-1.  Having 18 goals against, and scoring only 7 in 4 games is a horrible performance.  If it wasn’t for the big market New Jersey Devils also vying for the #1 pick with 8 losses in a row, their week was just as bad losing all 4, with 12 goals against and also scoring just 7.  The Devils are getting a lot of NHL press because it’s probably Marty Brodeur’s last year and he’s never lost 8 games in a row.

Mueller: ‘A lot of Rubber’

The Canes played toe to toe against the Rangers in the first with the Canes out shooting the Rangers 14-12.   The Rangers had the better scoring chances with Dan Ellis coming up big a number of times.

In the early part of the season, the second period belonged to the Canes.  In the past 15 games, not so much. The Rangers outshot the Canes 18-14 but more importantly put 3 of those in the net.  Two were on their powerplay on 5 chances.  The Canes also had 5 powerplays but again, failed to score on the man advantage.

A couple of bright spots were Jeff Skinner’s play and the callup of Zac Dalpe from the Checkers.  Dalpe has the size and speed the Canes need up front and needs to use both, like Tuomo Ruutu does, in finishing all his checks.

Ruutu is playing very well but may be just ever so timid in finishing checks as much as he did last year.  When he’s 100% on his game, he’s exciting to watch.  He’s still having good games but few have been at his normal level.

Dalpe scored the Canes lone goal on an excellent feed from Skinner from behind the net. Dalpe has the skills and hands of a scorer and needs to shoot more.

The Canes were weak on clearing the Rangers in front of Ellis while the Rangers helped All Star Henrik Lundqvist turn away 48 of 49 shots.  Any team that gets off 49 shots should be able to put more than 1 in the net.

The game against the Bruins was hard to watch. The Canes had plenty of shots but few were scoring threats.

The Bruins had a solid 5-0 lead until speedster Patrick Dwyer scored midway through the third.  Drayson Bowman scored less than a minute later that woke up the Bruins and their rabid fans.

Ever since Boston won The Cup a couple of years, Bruin mania is all over that town. I may not like any Boston team but I have to give them credit for fan support as that is a sports town that hard to match.

The Canes got off 39 shots but few were considered real threats. The Canes only had 2 powerplays that produced just 2 shots and no goals.  The Bruins only had one powerplay, got off 4 shots but also didn’t score on the man advantage.

Boston has some big forwards that the smaller Cane defensemen had trouble clearing from the crease.  Whenever the Canes forwards were in front of the Bruins’ net, they were quickly having their faces on the ice.  Different story at the other end of the ice.

Could this be the Game to Break the Slide

The game against Pittsburg was a major tease for the Caniacs.  After a solid first period the teams were locked at 2 a piece.  The Canes Riley Nash scored early in the third to give the Canes a 3-2 lead.  That held up until mid way through the period when the melt down occurred.  The Pens scored 2 goals in 13 seconds taking every bit of hope out of breaking this unbelievable slide.

Defensemen Joe Corvo and Bobby Sanguinetti scored goals in the first, breaking a scoring drought by the defense that seems like forever. Both goals were excellent goals with Corvo doing one of his favorite moves in carrying the puck to the center of the blue line then letting it fly.  Jordan Staal was in front of the net blocking Marc-Andre Fleury’s view, Corvo shoots, the puck goes in and if things start out this good, maybe, just maybe the Canes luck will turn for the better.  It was also a rare powerplay goal.

Sanguinetti’s goal was similar as Eric Staal won the faceoff dropping it back to Snaguinetti.  Staal and Juri Tlusti went to the front of the net creating excellent traffic. Sanguinetti sent a good hard shot that missed everyone but found the back of the net. Nash’s goal was another gritty goal with speed by Ruutu passing to Nash in the dirty area in front of the goal.

All was good until the bottom fell out with the Pens scoring 2 goals on defensive let downs mid way in the period. Jussi Jokinen played very well against his former team and had a great assist on Brandon Morrow’s goal.

The game against the Capitals was another tease.  Jeff Skinner scored an early powerplay goal giving the Canes their second game in a row starting off with a goal on the man advantage.  Could this finally be the powerplay unit living up to the preseason expectations?  Turns out the Canes went 1 for 3 on the powerplay but they did get off a total of 8 shots.

Again the Canes had a lot of shots, 44 in total with EStaal having 9, Alex Semin 8 and Tlusti 4.   The Canes did play well enough to win, and maybe should have, but the frustration of not winning has to have an effect on their performance.

It’s reported that Skinner has a short fuse in getting under his skin, and every team has 5 Chad LaRose’ who makes a living getting players off their game. Late in the game, Marcus Johansson did just that, and Skinner did the natural reaction of defending himself with both players going off for the final minute.   At that point the Canes needed Skinner on the ice, not in the box.

Sunday starts a new week but it doesn’t get easier as Boston is in town.  Florida, just 2 points behind the Canes, have a tough week themselves.  Ending up dead last only gives that team a better chance of the #1 draft pick as it’s a weighted lottery.  Edmonton has had the last 3 #1 picks and still will miss the playoffs this year.

Anyway you look at it, the Canes need help, or a parachute.