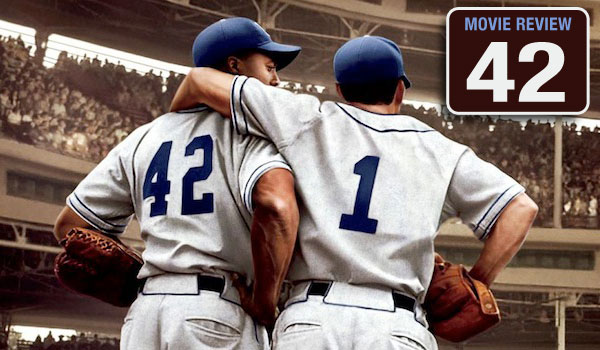 Morrisville, NC – 42, based on the story of Jackie Robinson, is in the great tradition of heroic baseball movies. If you liked Field of Dreams and The Natural, you will enjoy 42.

42 – The Story of Jackie Robinson

42 covers the time period from 1946-1947. Jackie Robinson goes from the Kansas City Monarchs in the Negro League to the Brooklyn Dodgers, breaking the color barrier in Major League Baseball.

Robinson’s story is a well-known and even beloved story in America. 42, Robinson’s jersey number, takes us deeper into the nuances of what really happened over those fateful two summers.

The storyline takes a couple of detours, but mostly sticks to the narrative of Branch Rickey (General Manager of the Dodgers) and of Robinson. The movie has several great moments of epiphany that had the audience wiping away tears, like when Robinson first understands that people consider him a hero. He just wanted to be a baseball player.

The tension builds throughout the movie, coming to a climax at the end of Robinson’s rookie season with the Dodgers, in a race for the National League pennant.

42 tells a great story from beginning to end. It will leave you wanting more. Like Field of Dreams and The Natural, 42 gives the audience that most elusive gift of theater: catharsis. The audience broke into applause at the end.

Chadwick Boseman, who plays Robinson, is a newcomer to the big screen and as a leading man. There’s an easiness about Boseman on screen, even in an intense role. I’m not sure how much we learn about Robinson, but that’s what baseball’s first black player became – a man who kept his feelings inside. “A gentleman and a ball player,” Branch Rickey told him.

For me, Harrison Ford as Branch Rickey stole the show. The scenes with Robinson had all the action, but the scenes with Rickey had all the deeper meaning. He explains the movie and is a complex character, interested in money, justice and ultimately, baseball.

Ford shows us a new side of his acting range, obliterating any notion you may have had about him as Han Solo or Indiana Jones. It’s a fine bit of acting and he’ll be nominated for Best Supporting Actor.

The cinematography by Don Burgess is wonderful. It’s worth seeing 42 on the big screen. The film is dark and rich, full of shadows and searing lights.

The special effects department did a great job generating Ebbets Field. It’s almost like being in old Brooklyn on a summer day.

The costumes take some liberties with the baggy styles of 1947-48, but everyone looks great.

The music by Mark Isham strongly supports the emotional arc of 42 and will, like Harrison Ford’s performance, get nominated for an Oscar. You may not notice the music in movies, but Isham’s score is there in every scene, amping up the drama of the script.

Director Brian Helgeland does a very good job pulling all the strings together and making a powerful addition to the canon of baseball movies.

Good baseball movies are really movies about America – our dreams, our flaws, our triumphs.

Robinson’s story is one of triumph – not just for the man, but for the sport and for everyone. Maybe we forget how ugly it really was back in 1947, but 42 reminds us of why we are sometimes considered a shining light to people around the world.

But 42 also shows us that greatness is not bestowed, it has to be earned. Think on the fact that 56 years after Jackie Robinson broke the color barrier in baseball, Danica Patrick became the first woman to win the pole position at the Daytona 500 in 2013.

42 is a good movie for families, fans of baseball and anyone who like a riveting drama.

According to Variety, 42 led the box office this weekend with estimated receipts of $21 million. That would make it the best opening for a baseball movie ever.

This was my first trip to the new Stone Theater in Park West. It is a very nice, new, shiny movie theater with big, plush, comfy seats, vast screens and sharp digital projection. I sat in the back row, far left corner (against the wall) and the picture looked great. Booming, seat-rattling sound, but crisp and intelligible during dialogue and softer scenes.

I thought Stone Theaters offered an excellent movie experience. $5.50 for matinees along with other specials.