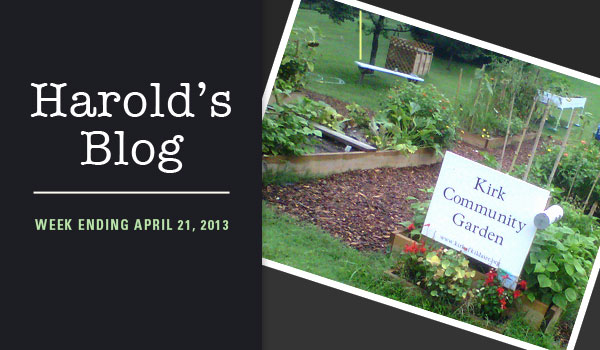 From the blog of Cary Mayor Harold Weinbrecht. Photo via Kirk of Kildaire on Facebook.

Cary, NC  – This week was a tough one, after having a week of vacation, with mayoral duties scheduled almost every day.

Later in the day I met with management, administration, legal, and department directors to go over the budget. We discussed the concerns and questions of the council members. In addition, I was notified that we would have a closed session. Based on that information I estimated the council meeting would last until about 8 PM.

Monday night I attended the Mayors Association meeting in Cary. Paul Meyer, Director of Governmental Affairs for the NC League of Municipalities gave a summary of State House and State Senate legislation that could harm municipalities. His short list included 94 Items.

One spreadsheet showed taxes that could be in jeopardy for towns that include: beer and wine, natural gas, electricity excise, privilege licenses, and 1 cent sales tax on food. If these taxes went away it would be a $7.5 million loss in revenue for Cary or about 4 additional cents to our tax rate. Hopefully, our new legislators will realize this and not harm municipalities and its citizens.

I introduced a letter to be sent to our federal delegation on the elimination of the current tax exemption on the interest earned from tax-exempt municipal bonds. If this change occurs it would drive up the borrowing costs on financial critical infrastructure, shift more of the burden for financing infrastructure from the federal to the local levels, and increase taxes on the middle class. The letter was approved unanimously and will be sent to our delegation from the Mayors Association.

Julie White, of the Metropolitan Mayors, presented a legislative update to the CAMPO members. I noted the following from her updates:

The NCDOT report including the following points:

The CAMPO meeting lasted one hour.

Later Wednesday I attended the last meeting and graduation of the Cary School of Government which was held at the Wake Med Soccer Park.

First we toured the expansion of the facility which included 3000 new seats, new locker rooms, party decks, sky boxes, and other rooms. Afterwards the Wake County Manager spoke of the relationships between county and municipalities. He also talked about the hotel/motel/food & beverage taxes which were used to build most of the soccer park and several other facilities like the Raleigh Convention Center and the Mudcats stadium.

After his talk he answered questions from the participants. Then the participants asked questions of the council members present which included Smith, Bush, and me. Once the question and answer session concluded we handed out the course certificates.

It was a good time and I appreciate and congratulate all the School of Government participants for caring about their town.

Thursday, I joined Mayor Pro-Tem Adcock and council member Robinson as we did our final budget preview with staff. Some of the topics covered were the Capital Improvements Budget, Development Fee trends, General Capital Reserve Fund, special capital projects, and implementation approaches for the Technology Task Force. After staff finishes previewing with all the council members they will finalize their budget which will be presented to council.

After the budget preview meeting I participated in a council group photo which was taken in the council chambers. We took several photos around the town seal with us seated and standing.

Next I headed outside to greet the Exchange culinary students from our sister city Le Touquet France. Wake Tech and the business school in France have been exchanging students for several years. My wife and I have hosted students several times in the past which has resulted great friendships. We still keep in touch with our first student from over ten years ago.

Thursday night the council held its regularly scheduled council meeting. In addition to presentations, recognitions, and public hearings, the council took several actions. The council amended an ordinance to allow electronic meetings for board appointed members once a year. The council also approved subcommittee recommendations to clarify architectural standards for building facades and buffering. Due to the lengthy closed session our meeting lasted until about 9:45.

Saturday I gave remarks at a Community Garden dedication at the Kirk of Kildaire Presbyterian Church. I was joined by council member Bush who gave remarks on sustainability.

This community garden was a culmination of actions by many in our community. Funding for the community garden was provided in part by the Town’s Neighborhood Improvement Grant Program. The amount of raised garden beds was doubled thanks to hard work by local Eagle Scouts. Local home improvement and garden centers generously donated plants.

This summer, the garden will benefit from the work and efforts of two Appalachian Service Youth projects and a class project by NC State Agriculture students. And the fruit of their labors will be shared with those who benefit from the Interfaith Food Shuttle, the local organization that helps provide healthy meals for families in our area. What a beautiful project with such positive results!

This week will continue to be busy. It includes a joint issues meeting with Morrisville elected officials, an elected officials reception sponsored by the Cary Chamber, a breakfast, and a cultural event.

Well that is all for this week. My next post will be on Sunday April 28th. Please feel free to email me with a comment. Email all Town of Cary questions or comments to Harold.Weinbrecht@townofcary.org. Email personal comments to augustanat@mindspring.com.