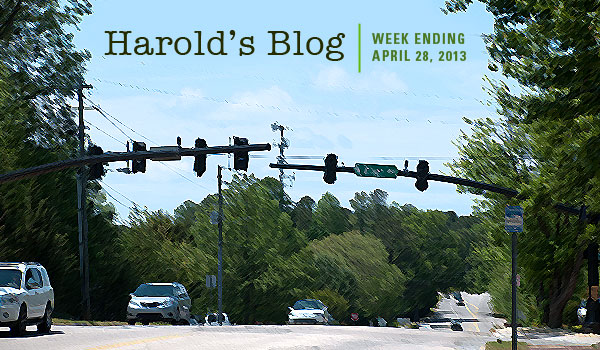 Cary, NC – This week included meetings, events, and personal celebrations. Every year during this week in April my wife and I celebrate our anniversary (26 years this year) and both our daughters’ birthdays.

Phone Call with a Citizen

I started out the week with a phone meeting. A citizen was very concerned about two group homes in a particular part of Cary. Her main concern was the way the property was not being kept and that was hurting the community. I agree, if there are homes (of any type) in your community that are not being kept then it will definitely hurt the value of your home.

Later Monday I met with the State Representative who is selling the state property by the Wake Med Soccer Park which is about 95 acres. There is an option by Lennar Homes to build a project like Inside Wade on this property. There have statements made that a “North Hills” type project could be built here instead.

In my meeting with the state representative, she wanted to make sure that I understood that the property was well advertised and this was the best offer. She also pointed out that if this proposal fails then the state would take the property and use it for state purposes. The council will make a decision on this proposal at its May 9th meeting.

Later Monday I participated in the Cary/Morrisville Joint Issues Committee. I was joined by Mayor Pro-Tem Adcock and council member Robinson. We discussed a variety of issues which impact both towns. Here are some of my take away points:

The committee meeting lasted just under an hour.

Catching Up with Mayor Pro-Tem Adcock

Monday night I met with Mayor Pro-Tem Adcock to catch up and discuss issues. It is important for us to meet at least once a quarter. The Mayor Pro-Tem will be running our May 23rd meeting since I will be in New York City for my daughter’s graduation. We talked about issues that could possibly occur during that meeting and how to best address them.

Tuesday’s first meeting was with the town manager for our weekly one on one. In our meeting we mostly discussed three issues:

Later Tuesday I met with the town’s transit service administrator, the planning director, and council member Bush to discuss CTran. Some interesting points and trends include:

Our meeting lasted a little over an hour. It was clear that most of our riders were the young, elderly, and those in service jobs. These folks are vital in keeping are businesses running and our community strong. Therefore our transit system remains an important service for our citizens.

Wednesday I joined many of the council members at an elected officials reception held at MacGregor Downs Country Club. This event was sponsored by the Chamber of Commerce and was our time to thank the other elected officials for all they do for Cary. Senators representing Cary were present but all NC House members were absent since they were in session. There were several elected officials, including judges, from the state and county levels attending. I gave a few welcoming remarks and so did a few others.

Thursday my calendar was blocked so that I could spend the evening with my wife since it was our 26th wedding anniversary. We had a nice quiet dinner which was special since my wife flew out on an early bird flight the next morning. We also celebrated the fact that both our daughters had birthdays this week. This week has always been a celebratory week for the Weinbrecht family.

Saturday morning I attended the Jefferson Jackson breakfast held at the North Raleigh Hilton. This was a Democratic event with several hundred in attendance.

Sunday I joined Mayor Holcombe of Morrisville and we spoke at the North Carolina Indian-American Political Action Committee’s luncheon. We each spoke about 20 minutes before answering questions from the audience. The event lasted about 2 ½ hours.

I picked my wife up at the airport and headed over to the Baisakhi festival at the Booth Amphitheater. This festival is celebrated across the northern Indian subcontinent, especially in the Punjab region by the Sikh community. For the second year in a row we have seen rain at this festival but this year they were able to get in most of the performances. I gave a few remarks along with Council member Rao from Morrisville. We both spoke about diversity and what it means to our community and this region.

In information from staff and other sources the Senate Commerce Committee gave a favorable report to HB 150 Zoning/Design & Aesthetic Controls Tuesday morning, sending the bill to the Senate floor. The bill previously passed in the House of Representatives and would thus become law if it is passed by the Senate and signed by Gov. Pat McCrory. Fortunately, this approval has been delayed since the bill was sent to the Rules committee.

It is important to understand that HB 150 was introduced at the request of the N.C. Homebuilders Association and would prevent cities from imposing aesthetic controls over 1- and 2-family dwellings in all zoning districts, unless these controls are agreed to by the developer.

Staff sent out the quarterly report this week. Here are some notes from that report:

Almost all trends, of things Cary has control over, are moving in a positive direction.

Emails from citizens this week included complaints about the downtown park proposal, concerns about downtown development in general, complaints about our upcoming Summit for the Future, and a false accusation that Cary is trying to take over areas south of Cary.

Next week will be busy with several events and speaking engagements.

Well that is all for this week. My next post will be on Sunday May 5th. Please feel free to email me with a comment. Email all Town of Cary questions or comments to Harold.Weinbrecht@townofcary.org. Email personal comments to augustanat@mindspring.com.

Weight of the Nation

Business: A New Generation of Customers is Here
Scroll to top