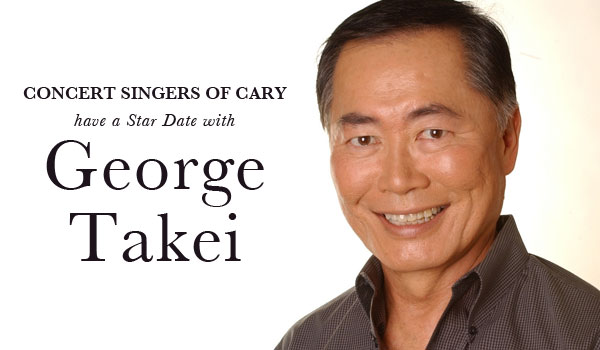 Cary, NC – The Concert Singers of Cary are doing three special shows in partnership with the N.C. Symphony. One of them includes a performance with Star Trek’s George Takei.

One of the new collaborations ,”A Sci-Fi Spectacular” includes an appearance by Star Trek and Facebook phenom George Takei (Sulu from the original Star Trek television show). Takai will provide narration to the vocal performance of the Symphonic Choir and the NC Symphony’s musical score.

Two performances are planned at Raleigh’s Meymandi Hall on June 27 and 28th.

June 7th, with William Curry conducting the symphony, the Singers will appear again at Meymandi Hall for “Video Game Live”, a multimedia performance.  The symphony and choir provide a sound track to video games projected onto large screens on stage.

The third partnership will be the symphony’s final Summerfest concert at Booth Amphitheatre on July 6 as they produce the ever-popular 1812 Overture. The singers will bring their symphonic choir of about 100 singers to perform the optional vocal performance accompaniment.

Events coverage on CaryCitizen is sponsored in part by Booth Amphitheatre in Cary.