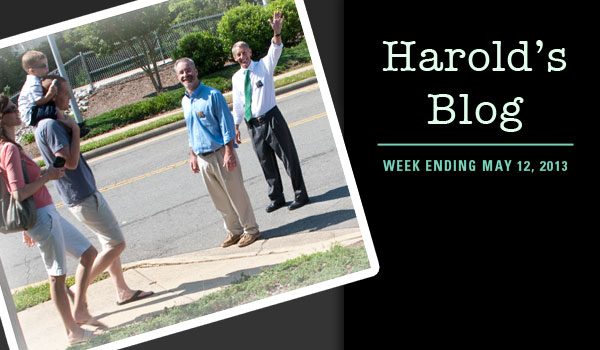 Cary, NC – This week was another busy week for me. This is the toughest time of year for me with event upon event combined with preliminary budget meetings and regularly scheduled council meetings.

Monday started with a quick unplanned visit to greet the MetLife executives who were in town. We should start seeing MetLife folks moving into the area soon. There should be at least a couple of hundred here before the end of the year.

Pull Down the Fire Sculpture?

As is the norm on weeks with regularly scheduled council meetings, I attempted to contact all council members for questions or concerns about Thursday’s council meeting agenda. I was able to contact all but one council member. In those calls there was a request to pull the downtown fire art sculpture and the downtown consultants from the consent agenda for discussion. Later in the evening I met with management, administration, legal, and directors to go over the agenda. Based on our discussion and my conversations with council members I predicted the meeting would last until about 8:30 PM.

After the agenda meeting I met with the town manager and a member of staff to discuss issues related to the upcoming CAMPO (Capital Area Metropolitan Planning Organization) meeting scheduled for Wednesday. This meeting was mostly an information sharing meeting.

My only scheduled meeting Tuesday was with the town manager. We discussed the changes in the budget preparations since our last preliminary budget meeting. The staff will make their budget recommendations to council in detail at work sessions starting on May 14th. Council will have to approve a balanced budget by the end of June.

Wednesday afternoon I attended the monthly CAMPO (Capital Area Metropolitan Planning Organization meeting and there were two votes that had a significant impact on Cary funding. The Harrison Avenue Study was approved to be rolled over to the next fiscal year. Cary’s Morrisville Parkway Interchange design request was not included in this year’s funding. However it was agreed that CAMPO would help fund Cary’s project once NCDOT determined what they were funding.

Later Wednesday I attended the 20th anniversary of the Stevens Nature Center. The Stevens Nature Center was created in 1996 through the generosity of the late Colonel William Stevens and the support of his family. Shortly after opening, the town designed, established and installed exhibits thanks in part to a large grant from Wake County. At the time, the late Colonel’s nephew, Richard Stevens, was serving as the Wake County Manager. He later represented Cary in the NC Senate. In 2010, we revamped and updated our exhibits to make them more fun and interactive. The overhaul was completed with additional funds for the Nature Center left in the late Colonel’s will. We are forever indebted to him for his support and will continue to incorporate his spirit and love of natural science in everything we do here at Stevens Nature Center.

Thursday started with a local developer lobbying me about the Boulevard property to be voted on at the council meeting later in the day.

Later in the afternoon I met with representatives for developers doing an expansion at the Glenaire retirement community. The meeting was to answer any questions and address any concerns I may have about the expansion.

Thursday night’s regularly scheduled council meeting had two controversial issues; Whether or not to landscape or remove the fire art sculpture on the performance green at Academy Street and the Boulevard rezoning proposal off of Cary Town Boulevard.

The council voted to remove the fire art sculpture. Moving experts have determined that moving the sculpture will more than likely destroy it. Staff will now come up with a proposal on how to move the sculpture. I was the dissenting vote because I believed that staff’s proposal to wait a few months until the Art Master Plan was finished was a fair compromise. That would have allowed a more appropriate permanent location for the fire sculpture if it were successfully moved. It was also important to note that the proposed landscaping that would be used for the fire sculpture would remain on location as the 13 acres built out in a couple of years.

I received a lot of very emotional email about the fire sculpture both for and against it. It is clear that this piece of art was very polarizing. I was proud that the council did not become art critics in our deliberation but instead focused on the location. That is, whether or not any piece of art is appropriate at the location.

The second controversial issue was the proposed rezoning of the state property off Cary Town Boulevard from Office and Institutional to mixed use which would allow mostly residential. The developers interested in this property stated that they wanted to build the Cary version of Inside Wade on this property. The vote was very close and the rezoning proposal failed by a 4 to 3 vote.

I voted against the rezoning because I believe it was not the ultimate best use of the property. Cary has three entry points at major highways: I-40 and Harrison, US1 and Tryon, and I-40 and Cary Town Boulevard. The I-40 and Harrison entry has two beautiful office parks: SAS Institute and Weston Office Park. Thousands of high paying jobs are located at this entry point. The US1 and Tryon entry has Regency Office Park which is also a great office park. Again, high paying jobs are here. One of the most recent companies to locate in Regency was Lexis Nexis that I blogged about last week. It is my belief that the I-40 and Cary Town Boulevard entry to Cary also has this great potential. There has been and will always be demand for great residential projects which was the case in this proposal. But it is our decision to make sure properties are developed with the best possible use.

Friday evening I attended Cary’s National Night Out on Academy Street along with council members Smith and Frantz. National Night Out is an annual crime and drug abuse prevention event sponsored by the National Association of Town Watch. The event brings citizens and Cary police together to strengthen neighborhood spirit and foster partnerships for safer communities. In addition to the police were Cary’s fire departments. There were lots of activities, booths, and things to do. I was able to try beer goggles and found that I couldn’t pass the sobriety test even with the ones at the lowest level. I spent time talking to citizens, officers and firefighters, and vendors. It was a well-attended event.

Saturday morning I gave remarks at Cary’s National Train Day. National Train Day is a holiday started by Amtrak in 2008 as a method to spread information to the general public about the advantages of rail travel and the history of trains in the United States. It is held each year on the Saturday closest to May 10th, the anniversary of the pounding of the Golden Spike in Promontory, Utah which marked the completion of the first transcontinental railroad. Events are held at Amtrak stations as well as railroad museums across the country and often have passenger cars and model railroad layouts on display. Cary was fortunate to have the Cary Town Band and several national train dignitaries at our celebration. Cary’s very existence was predicated on the railroad. Frank Page, Cary’s founder, heard that there would be a railroad form New Bern to Hillsboro. He bought 300 acres in speculation of this information. He guessed right and the Page-Walker hotel was built right next to the tracks and Cary was born.

The event was festive and had a lot of activities for children including a miniature train that ran from the Chamber of Commerce to the Page-Walker hotel. After my remarks I talked with people both at the train depot and the Page-Walker. It was another well attended event in our downtown.

I was scheduled to attend the Ritmo Latino festival but it was postponed until June 22nd due to the threat of bad weather.

There were lots of emails from citizens this week. Unfortunately some of them were, let’s say, not nice.

Regarding my comments last week on the Summit for the Future I received one email that said I was arrogant and closed minded. In another email, a citizen stated:

“… Taxpayers need to know how your elaborate scheme is going to further pinch their wallets.   … the revealing of conspiracy by town managers and planners; deceit; exploitation of civic minded citizens; gross abuse of office…”

Wow! I guess some people have very good imaginations.

Fortunately, I can inequitably say that I know of no person or “Scheme”. I would invite the conspiracy theorists and critics of Imagine Cary to send me their ideas of what they think the future of Cary should be in the upcoming decades. After all, THAT is what we are trying to plan.

I also received many emails regarding the fire art sculpture as I mentioned earlier. What is sad is now some of them are sending requests to have other art in downtown Cary removed. As someone pointed out to me, if you tried to please everyone with art you would end up with a Norman Rockwell painting. To me we need to be careful with the placement of art and not become art critics.

The remaining emails I received were mostly about the Boulevard rezoning. In addition, there were several developers that left voice messages. I did talk and meet with most of them.

This week I will be busy mostly in my “other job” trying to prepare for two weeks of being out of town. I am scheduled to give remarks at the Teacher Awards and to participate in a Leadership Forum. Our first budget work session is also scheduled for this week.

Well that is all for this week. My next post will be on Sunday May 19th. Although I have Facebook and Twitter accounts those are not the best means of communications with me. Please send all Town of Cary questions or comments to Harold.Weinbrecht@townofcary.org and email personal comments to augustanat@mindspring.com.