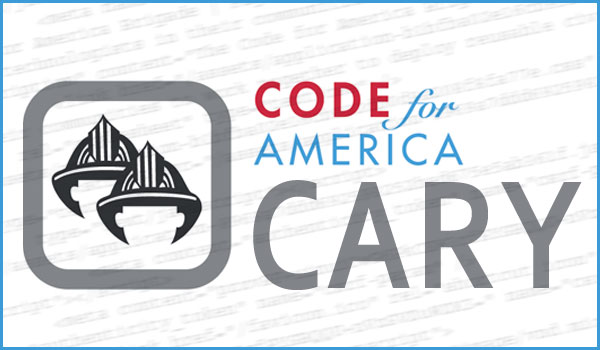 Cary, NC – Code for America (CfA) started in 2009. It’s a non-profit, non-partisan organization that brings together programmers, designers, data analysts and other web-industry professionals to work with municipalities to promote openness, participation and efficiency in local government. Now, Cary has it’s own Code for America Brigade.

CfA is all about public service through code. Brigades are specifically designated the task of reusing and repurposing existing technology for local governments. Why reinvent the wheel?

Open Data is a prime example. Governments collect oceans of data on citizens, costs and process. Open data uses existing tools to put that information on the web where it is available to everyone.

CfA Brigades bring together programmers to code something useful, like a mashup of crime data with a Google map.

Vast server farms of data exist about our community – maps and water usage, crime, business permits and home sales, to name just a few. Pulling the data together so it can become useful for the community is the goal of the CfA Cary Brigade.

In 2012, CfA Brigades around the country created 27 municipal apps, including Honolulu Answers, Where’s My Schoolbus and Adopt-a-Hydrant. In the Triangle, the R/Greenway app was developed at Raleigh CityCamp.

CfA Cary can implement some of these open source applications for our own community, or write code for a new municipal app and share it.

Code in the Triangle

The CfA Brigade in Cary had its beginnings in the Technology Task Force, convened by Cary Town Council last year.

But the idea of a CfA brigade in Cary really got its start at  Cary Open Data Day in February.

The Cary Brigade will hold a kick-off meeting on Tuesday, May 28, 2013 starting at 7:00 PM (EST) in Cary. The information is loaded in the Triangle Code for America Meetup Site. Register and join the Cary Code for America Brigade.

What is next for the Triangle?

If this sounds cool, then join the Brigade in your Town or City, or help us here in Cary.

Ian Henshaw of TechnologyTank.org contributed to this article.

Editor’s Journal: A Weekend in Pictures