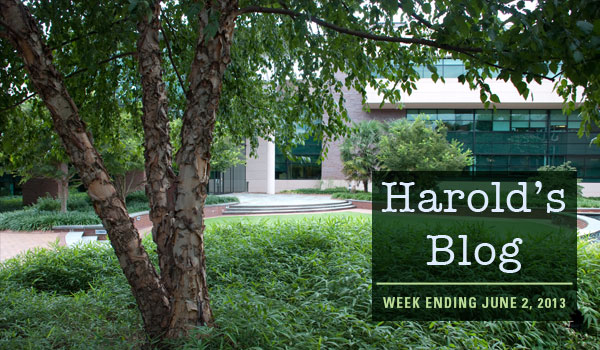 Cary, NC – This is my first post since May 19th. I have been out of town most of the last two weeks on vacation. Mayor related contents of this post will be limited.

On Monday, May 20th I attended an agenda meeting along with Mayor Pro-Tem Adcock. Since I was not going to be in town for the regularly scheduled council meeting she assumed the role of calling all council members for concerns and questions. The agenda meeting was fairly straight forward and there were no major issues. After the agenda meeting the Mayor Pro-Tem and I talked briefly with staff about a work session on Imagine Cary which was scheduled for the next day.

On Tuesday, May 21st I drove to Augusta, Georgia to play a round of golf on the famed Augusta National golf course. As a Masters Golf tournament volunteer of 35 years, I am blessed to be a part of such a great event and to be able to play the course once a year.

After my round I got in the car and headed back to Cary. I phoned in to the work session which was being facilitated by Mayor Pro-Tem Adcock. The first discussion item was on technology recommendations requesting a pilot program. Staff stated that any program would require additional funding for the proposed budget. Council decided not to pursue the requests for this year.

There was also a great discussion about perceptions and expectations focusing mainly on the Imagine Cary Summit. As a result I believe council and staff are now in sync as to what is expected as we proceed in this multi-year process. I arrived back in Cary late Tuesday night.

Wednesday morning I joined my youngest daughter and wife as we flew to New York City. Our oldest daughter graduated the next day and we had a great time in the big apple. My brother and I then loaded my oldest daughter’s belongings to be sent back to Cary. The family arrived back in Cary Friday night.

Saturday morning I packed the car and headed to Hilton Head for the family vacation. This is one of my favorite things every year. Some of the things I enjoy include playing tennis one and a half hours each day, riding a bike on the beach for two to three hours each day, getting in a five mile run on the beach before dinner, and of course being with my family.

After vacationing for a week, the family arrived back in Cary on Saturday night, June 1st and I have been playing catch-up ever since.

Summit on the Future

Since I have been gone there have been lots of emails. A lot of them had to do with the Summit which was the kickoff to Imagine Cary. In the past I have listed some of the comments from the conspiracy theorists that believe everything is pre-determined and that the town is wasting money. The following is from a citizen who thinks otherwise:

“…I am becoming increasingly dismayed reading about the coverage on the Summit on the Future.  I attended the Summit.  My table and everyone else I spoke to who went to the meeting were very positive about the speaker and his ideas.  I understood the fact that he was talking about a walkable urban area that would comprise 10% of a town and leave the rest as it is.  I resent the idea that I am not intelligent enough to listen to a presentation and be able to come up with my own conclusions.

I want Cary to embrace new ideas and become a vibrant area that young people will want to move to.  I think Cary can be a great place to live for each generation.   Please don’t let a vocal minority have an undue influence on the outcome of this process.  So many times, it’s the detractors who have the loudest voices….”

On the negative side I once again received several emails that the town is spending too much money for Imagine Cary. On that point I think it is important to understand that the plan from Imagine Cary will be an integrated plan that will combine more than a dozen plans. As a result the plan will be more comprehensive and represent all the town’s guidelines in one place. By having only one plan to update rather than more than a dozen, the town will save more than two million dollars in updates (some of these plans were already due for updates).

Imagine Cary has become political and controversial when in reality it is just a process to create a vision for the town’s future. My hope is that everyone will participate in the process no matter what perceptions they may have. Please get involved and attend one of the following area conversations:

I plan to be at the June 11th conversation. I hope to see you there!

Emails from citizens during the last two weeks included comments about the lack of technology initiatives in the upcoming budget, several other budget concerns, several code violation issues, a request to create competition for Time Warner Cable, a complaint about the lack of cell phone reception in West Cary, several concerns about the proposed rezoning for the Herndon Burt property, a request to advocate for legalizing marijuana, a request to support senior housing across from Glenaire, and several concerns about legislation regarding the Jordan Lake Rules.

This coming week will be slow and allow me to adjust from vacation back to two full time jobs. On the calendar will be a work session, a school visit, and several events.

Well that is all for this week. My next post will be on Sunday June 9th. Although I have Facebook and Twitter accounts those are not the best means of communications with me. Please send all Town of Cary questions or comments to Harold.Weinbrecht@townofcary.org and email personal comments to augustanat@mindspring.com.